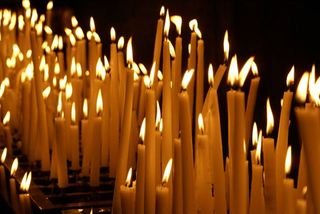 What makes us feel spiritual? It could be the quieting of a small area in our brains, a new study suggests. The area in question — the right parietal lobe — is responsible for defining "Me," said researcher Brick Johnstone of Missouri University. It generates self-criticism, he said, and guides us through physical and social terrains by constantly updating our self-knowledge: my hand, my cocktail, my witty conversation skills, my new love interest … People with less active Me-Definers are more likely to lead spiritual lives, reports the study in the current issue of the journal Zygon. Most previous research on neuro-spirituality has been based on brain scans of actively practicing adherents (i.e. meditating monks, praying nuns) and has resulted in broad and inconclusive findings. (Is the brain area lighting up in response to verse or spiritual experience?) So Johnstone and colleague Bret Glass turned to the tried-and-true techniques of neuroscience’s early days — studying brain-injured patients. The researchers tested brain regions implicated in the previous imaging studies with exams tailored to each area’s expertise — similar to studying the prowess of an ear with a hearing test. They then looked for correlations between brain region performance and the subjects' self-reported spirituality.   Among the more spiritual of the 26 subjects, the researchers pinpointed a less functional right parietal lobe, a physical state which may translate psychologically as decreased self-awareness and self-focus. The finding suggests that one core tenant of spiritual experience is selflessness, said Johnstone, adding that he hopes the study "will help people think about spirituality in more specific ways." Spiritual outlooks have long been associated with better mental and physical health. These benefits, Johnstone speculated, may stem from being focused less on one’s self and more on others — a natural consequence of turning down the volume on the Me-Definer. In addition to religious practices, other behaviors and experiences are known to hush the Definer of Me. Appreciation of art or nature can quiet it, Johnstone said, pointing out that people talk of "losing themselves" in a particularly beautiful song. Love, and even charity work, can also soften the boundaries of "Me," he said. The greatest silencing of the Me-Definer likely happens in the deepest states of meditation or prayer, said Johnstone, when practitioners describe feeling seamless with the entire universe. That is, the highest point of spiritual experience occurs when "Me" completely loses its definition. "If you look in the Torah, the Old Testament, the New Testament, in the Koran, a lot of Sufi writings, Buddhist writings, and Hindu writings, they all talk about selflessness," said Johnstone. We may be finding the neurological underpinnings of these writings, he said.