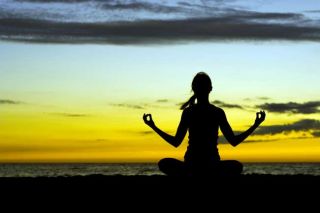 The seemingly nonsensical Zen practice of "thinking about not thinking" could help free the mind of distractions, new brain scans reveal.

In the last decade, there has been a resurgence of scientific research into meditation, due in part to the wide availability and increasing sophistication of brain-scanning techniques. For instance, scientists recently found that months of intense training in meditation can sharpen a person's brain enough to help them notice details they might otherwise miss.

"It is important that this type of research be conducted with high scientific standards because it carries a long-standing stigma — perhaps well-deserved? — of being wishy-washy," said researcher Giuseppe Pagnoni, a neuroscientist at Emory University in Atlanta. "Constructive skepticism should always be welcomed as a great sparring partner."

Pagnoni and his colleagues investigated Zen meditation, which Pagnoni himself has practiced while studying for his doctorate in Italy.

The Zen of Zen

Zen meditation vigorously discourages mental withdrawal from the world and dreaminess, and instead asks one to keep fully aware with a vigilant attitude. It typically asks one to silently focus on breathing and one's posture with eyes open in a quiet place and to calmly dismiss any thoughts as they pop up, essentially "thinking nothing." One can over time learn how to keep one's mind from wandering, become aware of otherwise unconscious behaviors and preconceived notions and hopefully gain insights into oneself, others and the world.

To see what effects Zen meditation might have on the brain, scientists compared 12 people from the Atlanta area with more than three years of daily practice in Zen meditation with 12 novices who had never practiced meditation.

The researchers "had to screen — and discard — a number of colorful characters who during the interview declared that they were meditating regularly by screaming in a towel while stomping their feet on the ground, or that they were communicating frequently with beings of other planets," Pagnoni recalled. "Such are the unexpected joys of this research!"

Their scans revealed that Zen training led to different activity in a set of brain regions known as the "default network," which is linked with spontaneous bursts of thought and wandering minds. After volunteers experienced in Zen were distracted by the computer, their brains returned faster to how they were before the interruption than novice brains did. This effect was especially striking in the angular gyrus, a brain region important for processing language.

"The regular practice of meditation may enhance the capacity to limit the influence of distracting thoughts," Pagnoni said.

"What I find really interesting in this approach is that it stands to regulate the mind by regulating the body — posture, breathing," Pagnoni said. The neural circuits for controlling posture are quite distinct from those responsible for higher brain functions, "and perhaps shifting one's attention to posture or breathing facilitates a temporary quelling of mental chatter."

By teaching people how to clear their minds of interruptions, Zen meditation could help disorders marked by distracting thoughts, Pagnoni said.

"There is already some evidence that a behavioral therapy incorporating elements of mindfulness training derived from meditation can be beneficial in reducing relapses in major depression," Pagnoni noted.

Pagnoni added that the default mode network might be especially vulnerable to Alzheimer's disease.

"Although we enter the field of wild speculations here, could the practice of meditation, by providing regular intervals of respite in the incessant working of the default network, have — if mildly — protective effects for Alzheimer disease?" he conjectured.

The research, funded by a National Institutes of Health grant, is detailed online Sept. 3 in the journal PLoS ONE.