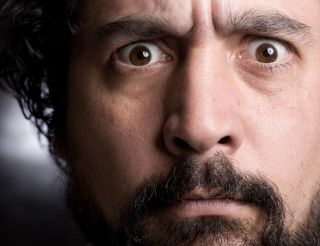 Mental illnesses afflict 25 percent of U.S. adults, according to official numbers. But in reality, we're all a little crazy. And for good reason: Nature doesn't really care about our happiness. Image
(Image: © Dreamstime)

Natural selection wants us to be crazy — at least a little bit. While true debilitating insanity is not nature's intention, many mental health issues may be byproducts of the over-functional human brain, some researchers claim.

As humans improved their gathering, hunting and cooking techniques, population size increased and resources became more limited (in part because we hunted or ate some species to extinction). As a result, not everyone could get enough to eat. Cooperative relationships were critical to ensuring access to food, whether through farming or more strategic hunting, and those with blunt social skills were unlikely to survive, explained David C. Geary, author of "The Origin of Mind" (APA, 2004), and a researcher at the University of Missouri.

And thus, a diversity of new mental abilities, and disabilities, unfurled.

The Nature of joy

It might seem as though modern man should have evolved to be happy and harmonious. But nature cares about genes, not joy, Geary said.

Mental illnesses hinder one in every four adults in America every year, according to the National Institute of Mental Health. And this doesn’t count those of us with more moderate mood swings.

To explain our susceptibility to poor mental health, Randolph Nesse in "The Handbook of Evolutionary Psychology" (Wiley, 2005) compares the human brain with race horses: Just as horse breeding has selected for long thin legs that increase speed but are prone to fracture, cognitive advances also increase fitness — to a point.

People with aggressive and narcissistic personalities are the easiest to understand evolutionarily; they look out for number one. But even if 16 million men today can trace their genes to Genghis Khan (nature's definition of uber-success can be measured by his prolific paternity), very few potential despots achieve such heights. Perhaps to check selfish urges, in favor of more probable means to biological success, social lubricants such as empathy, guilt and mild anxiety arose.

For example, the first of our ancestors to empathize and read facial expressions had a striking advantage. They could confirm their own social status and convince others to share food and shelter. But too much emotional acuity — when individuals overanalyze every grimace — can cause a motivational nervousness about one's social value to morph into a relentless handicapping anxiety.

Another cognitive innovation made it possible to compare potential futures. While other animals focus on the present, only humans, said Geary, "sit and worry about what will happen three years from now if I do that or this." Our ability to think things over, and over, can be counterproductive and lead to obsessive tendencies.

Certain types of depression, however, Geary continued, may be advantageous. The lethargy and disrupted mental state can help us disengage from unattainable goals — whether it is an unrequited love or an exalted social position. Evolution likely favored individuals who pause and reassess ambitions, instead of wasting energy being blindly optimistic.

Natural selection also likely held the door open for disorders such as attention deficit. Quickly abandoning a low stimulus situation was more helpful for male hunters than female gatherers, writes Nesse, which may explain why boys are five times more likely than girls to be hyperactive.

Sex, and survival of one's kids, is the whole point — as far as nature is concerned. Sometimes unpleasant mental states lead to greater reproductive success, said Geary, "so these genes stay in the gene pool."