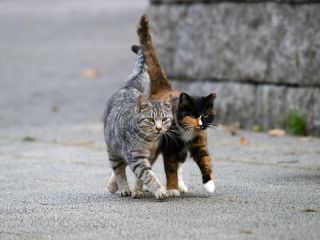 How far feral cats roam can now be estimated from space, a new study finds.

No, satellites haven't become so sensitive as to be able to follow the movements of individual felines. But a new study finds that the productivity of a landscape — measured by vegetation-tracking satellites — determines the range of feral cats.

This matters because feral cats (domesticated cats that live in the wild) are major predators for native birds and small mammals the world over. A 2013 study published in the journal Nature Communications estimated that cats kill between 1.4 billion and 3.7 billion birds and as many as 20.7 billion small mammals each year. [Images: See the World from a Cat's Eyes]

But feral cats are hard to control, because they behave very differently depending on where they live, said Andrew Bengsen, a research scientist in the New South Wales Department of Primary Industries Vertebrate Pest Research Unit in Australia, and lead author of the new study.

"An understanding of the movement patterns of feral cats, particularly the distances that they travel in the course of their day-to-day activities, is critical to developing effective control programs, because it determines how large [of] an area needs to be managed and how intense the control activities need to be within that area," Bengsen told Live Science.

Tracking feral cats is expensive and difficult, Bengsen said. Most studies rely on GPS collars, a labor-intensive method that's difficult for cash-strapped government management organizations. Plus, GPS tracking requires releasing feral cats back into the environment, where they can continue to kill birds and mammals. This is particularly threatening on islands off of Southeast Asia and in the South Pacific, where cats threaten one-of-a-kind island species.

So Bengsen and his colleagues looked skyward. They pulled data from NASA satellites that measure greenery on Earth, which in turn defines the productivity of the landscape, or how much biomass is produced. The more productive a region is, the richer it is in life, the scientists said.

The researchers combined this space-based information with data from 41 previous GPS tracking studies and with estimates of feral cat population density at 47 locations.

The findings revealed huge variations in the ranges of feral cats: from as little as 0.45 square miles (1.16 square kilometers) to as much as 9 square miles (23.24 square km) for females. Males typically have wider ranges, because they travel around looking for females to mate with.

Landscape mattered in explaining these variations, the study said. In low-productivity areas like deserts, Bengsen said, cats traveled farther. Ranges were smaller in high-productivity environments, such as forests. And the denser the population of cats in a region, the smaller the animals' home ranges were. Seasonality of resources mattered as well, Bengsen said.

Most of the sites included in the study were located in Australasia because that region is where feral cats pose the greatest threats to native species. But, the researchers also examined several sites in Europe and North America, Bengsen said.

"We collected data from sites ranging from deserts to subalpine ranges," he said, adding, "We're fairly confident that the relationships we found should hold in similar sites elsewhere."

Tracking urban cat colonies wouldn't be possible with this technique, however, Bengsen said. In cities, wild cats depend on food not measurable by satellite data, such as human refuse (or rodents in that refuse). One 2015 study of feral cats in the eastern United States found that the animals preferred urban corridors and yards to wilder areas, perhaps because coyotes roamed more freely in the wilder regions.

However, the study should give wildlife managers a guide to containing the damage from feral cats in wild areas, Bengsen said.

The researchers reported their findings Sept. 22 in the Journal of Zoology.