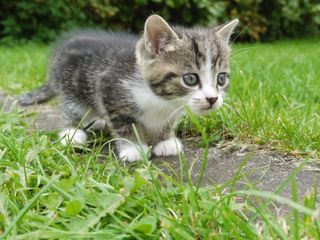 Cats may be adorable, but environmentalists argue they're also a scourge for wildlife
(Image: © Menna | Shutterstock.com)

Cats may be city slickers that rarely venture out into the wilderness, a new study suggests.

In fact, the new study shows that feral cats roam in urban and suburban parks and yards, but they rarely set their paws down in wilder green spaces.

Cats have gotten a bad rap in recent years. The furry carnivores have been implicated in wildlife killings: Researchers reported in 2013 that American cats kill up to 3.7 billion birds, and more than 20 billion small mammals, each year. Most of those killings are tied to feral cats, which don't have human owners, though kitty cams have revealed outdoor domestic cats are also partaking in the carnage, that study found.

To better understand Felis catus, Hess and his colleagues, along with hundreds of citizens in six Eastern states from Maryland to Tennessee, deployed critter cams in yards, urban parks, protected wild spaces and green corridors.

After analyzing millions of hours of footage, the team found that cats tended to stick to urban and suburban settings: They were 300 times more likely to pop up in residential yards than in parks.

In addition, cats were scarce in areas where coyotes roamed. The more coyotes that prowled an area, the fewer kitties ventured there, according to the study, which was published today (June 30) in the Journal of Mammalogy. The one exception was that coyotes were occasionally found in urban corridors that were connected to larger green spaces, said study co-author William McShea, a wildlife ecologist at the Smithsonian Conservation Biology Institute in Virginia.

"Coyotes have such a bad reputation," McShea told Live Science. "There are still bounties in some states for removing coyotes as varmints."

Bigger kid on the block

The new findings, however, suggest coyotes play a positive role in keeping cats at bay in wilder spaces, McShea said. Coyotes are the "big kid on the block" and are aggressive toward cats, which may cause cats to stay off coyote turf, he added.

But although coyotes may be preying on kitties, or simply leaving their scent behind to keep cats away, it's also possible that cats and coyotes have different prowling grounds for unrelated reasons, Hess said. Cats may simply stick close to human habitation because people still provide them with food, he said.

When coyotes prowl wilder areas, it's better for birds, Hess said. Though coyotes do catch and eat some feathered creatures, coyotes aren't stalking and pouncing experts like cats are, McShea said.

Coyotes are "just too big and clumsy to get the birds that cats can," McShea said.

Putting cameras on both wild cats and coyotes could provide a better picture of how the two species interact, Hess said. And to really understand cats' impact on wildlife, researchers should catalog the bird species that cats capture, Hess said. Killing endangered or threatened birds would be much more damaging to the ecosystem than preying upon urban pests or common species like cardinals, he said.

Editor's Note: This story was updated to note that that cardinals are common in many regions of North America, but are not invasive species.