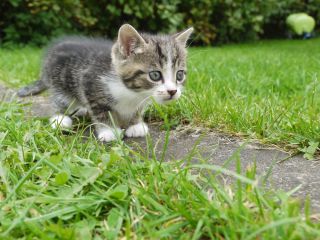 Cats may be adorable, but they're also killers: a new study suggests that kitties are responsible for billions of bird and small mammal deaths a year.
(Image: © Menna | Shutterstock.com)

Cats kill billions of birds every year and even more tiny rodents and other mammals in the United States, a new study finds.

According to the research, published today (Jan. 29) in the journal Nature Communications, cats kill between 1.4 billion and 3.7 billion birds and between 6.9 billion and 20.7 billion small mammals, such as meadow voles and chipmunks.

Though it's hard to know exactly how many birds live in the United States, the staggering number of bird deaths may account for as much as 15 percent of the total bird population, said study co-author Pete Marra, an animal ecologist with the Smithsonian Conservation Biology Institute.

Marra and his colleagues are looking at human-related causes for bird and wildlife deaths in the country, from windmills and glass windows to pesticides.

But first, Marra and his team looked at the impact of the feline population, one of the biggest putative causes of bird demise in the country.

While past studies had used critter cams or owner reports to estimate the number of birds killed by cats, those studies were usually small and not applicable to the entire country, Marra told LiveScience.

For this broader analysis, the team first looked at all prior studies on bird deaths and estimated that around 84 million owned-cats live in the country, many of which are allowed outdoors. [In Photos: America's Favorite Pets]

"A lot of these cats may go outside and go to 10 different houses, but they go back to their house and cuddle up on Mr. Smith's lap at night," Marra said.

Based on an analysis of past studies, the researchers estimated that each of those felines killed between four and 18 birds a year, and between eight and 21 small mammals per year.

But the major scourges for wildlife were not those free-ranging, owned-cats, but instead feral and un-owned cats that survive on the streets. Each of those kitties — and the team estimates between 30 million and 80 million of them live in the United States — kills between 23 and 46 birds a year, and between 129 and 338 small mammals, Marra said.

And, it seems, the small rodents taken by felines aren't Norway rats or apartment vermin, but native rodent species such as meadow voles and chipmunks, he added.

One obvious step to reduce the mass wildlife death is to keep kitties indoors, Marra said.

Should cats be banned from going outdoors?

Wild cats pose tougher questions, because capture and sterilization approaches have varying levels of success depending on the community, said Bruce Kornreich, a veterinarian at Cornell University's Feline Health Center, who was not involved in the study.

While keeping owned-cats indoors is the best way to benefit both kitties and wildlife, a complete cat ban, like the one recently proposed in New Zealand, is probably not the answer, he said.

For one, it's not clear how completely removing cats from outdoors would affect the ecosystem.

"It may be in some cases that cats may also be keeping other species that may negatively impact bird and other small mammal populations in check," Kornreich told LiveScience.