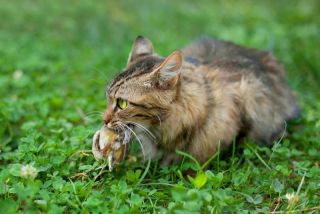 Cats are responsible for a surprising number of bird deaths each year. But will a campaign to eradicate such pet cats in New Zealand help save the birds?
(Image: © vvvita | Shutterstock)

"Imagine a New Zealand teeming with native wildlife, penguins on the beach, kiwis roaming about in your garden. Imagine hearing birdsong in our cities."

This is environmentalist Gareth Morgan's vision for his homeland, and to help make it a reality, he has an appeal for his compatriots: Get rid of your cats.

Morgan's newly launched campaign, Cats to Go, is pushing for much tighter controls on New Zealand's cats, which prey on native birds and are considered an invasive species on the island country. He's not asking all cat owners to euthanize their beloved pets (though his website says "that is an option"), but Morgan wrote in a Jan. 23 op-ed in Wellington's Dominion Post that owners should acknowledge that they are harboring "a natural born killer."

"At the very least responsible people should consider not replacing it when it dies and meanwhile either keep it indoors or invest in a cat-proof enclosure in the backyard," he wrote. Morgan also suggested neutering and cat collars with bells, and the campaign's website has a petition to lobby local governments to require that all owners register their cats.

His plea sparked furor among some cat lovers and organizers working to prevent animal cruelty, but are the ideas behind the campaign really that crazy?

Should cats be banned from going outdoors?

"We have long accepted the fact that you can't let your dog run free, and yet cat owners seem to take offense at the idea that they would be asked to keep their cats indoors," he said.

Once let outside, cats often look more like hunters than cuddly creatures whose main enemies are stuffed toys. A 2011 study in the Journal of Ornithology showed that in suburban areas outside of Washington, D.C., 80 percent of gray catbirds were killed by predators before reaching adulthood, and nearly half of those deaths were caused by cats. Though exact figures are hard to come by, the American Bird Conservancy (ABC) estimates that more than 500 million bird deaths in the United States can be attributed to cats, both pets and strays. [10 Amazing Facts About Cats]

In an effort to keep vulnerable migratory birds out of feline mouths, ABC has been urging responsible cat ownership with its Cats Indoors campaign. Conservation goals aside, ABC officials said keeping a cat inside is safer for both the pet and its owner.

Bob Johns, a spokesman for the organization, said outdoor cats have one-third the life expectancy of indoor cats, and they are also more likely to pick up diseases from interactions with feral animals. While dogs are usually associated with rabies, cases of rabid cats are on the rise. In 2009, there were three times more reported cases of rabies in cats than dogs, according to the U.S. Centers for Disease Control and Prevention (CDC). From contact with cat feces, humans can also get the mind-controlling parasite Toxoplasma gondii, which has been linked to a variety of brain problems and mental health issues, including suicide attempts. The parasite is the reason pregnant women are advised not to change cat litter boxes. The deep bite of cats also can transmit the infection-causing bacteria Pasteurella multocida.

Some contend that it's unclear whether Morgan's vision for a return to a pre-cat paradise could be realized. Bruce Kornreich, a feline health expert at Cornell University's College of Veterinary Medicine, said removing cats could have unintended side effects for birds.

"It is undeniable that cats do prey on birds, and that in some cases this predation can have negative impacts on native bird populations," Kornreich said in a statement. "It is important to point out, however, that some studies have shown that birds are much more adaptable to predation than initially thought, and that, in fact, in some cases feline predation may impart a survival advantage to native bird populations by controlling rodent or other potential predator populations, for example."

Both Temple and Johns rejected the notion that removing cats could have a negative impact on birds and said such fears shouldn't hold back efforts to curb cat predation. [Photos: The 10 Strangest Parasites]

"Anyone who suggests that cats help birds by killing their predators is completely ignoring the fact that cats inflict a deadly one-two punch by not only killing birds but also killing the prey (rodents, lizards, snakes) for birds such as hawks, owls and eagle," Johns said. "If you remove a predator of this caliber from the ecosystem, is it going to help reduce mortality? It's gonna have to."

There are few cases where it's even possible to study the effect of removing cats on bird populations. But Johns pointed to an example in Hawaii, which, like New Zealand, is made up of islands, meaning it's especially vulnerable to both the extinction of native species and the spread of invasive mammals like cats. At a nature preserve on the Hawaiian island of Oahu, biologists reported last year that Laysan albatrosses and wedge-tailed shearwaters have been thriving since predator-proof fences were installed to keep rats, cats and mongooses out.

Ultimately, the debate in New Zealand is not likely to ride on environmental evidence, but rather emotions. Years ago, Temple became the target of death threats over his research on the ecological harm caused by animals like cats, and he said he still gets hate mail when his name appears in the news today.

"I had no idea what I was getting myself into," Temple said.

The Cats to Go campaign points out that New Zealand has the most cats per capita, with a pet feline population of 1.4 million, and most owners seem unlikely to give up that companionship. A poll on Morgan's website asks, "In the interest of protecting native species would you consider not replacing your cat with a new one when it dies?"

Of the hundreds of people who have responded so far, 74 percent said, "no."