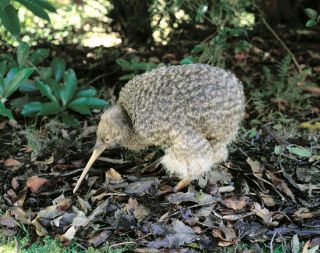 The little spotted kiwi is the smallest species of kiwi.
(Image: © John Camemolla/Shutterstock )

Kiwis are pear-shaped, flightless birds with long legs and beak. Though they look to be covered in fur, kiwis actually have thin, hair-like feathers. Their closest relatives are the emu, ostrich, cassowary and rhea.

The kiwi's muscular legs make up around a third of its total body weight, and according to the San Diego Zoo, a kiwi can outrun a person.

Kiwis' wings are tiny, at around 1 inch (3 cm). Each wing has a small claw on the tip, though the claw has no known use.

Kiwis are found only in New Zealand in forests, scrublands and grasslands. They sleep in burrows, hollow logs or under dense vegetation.

Kiwis are typically nocturnal, which means they sleep during the day and are active during the night. Throughout the night, they spend their time foraging for food.

When it's not foraging, it is patrolling its territory. It will leave behind highly odorous droppings to mark its area as it walks. The only other kiwis allowed in its territory are its spouse, its young and its adult children. If another kiwi does wander into another's territory they will fight.

Kiwis are omnivores. They munch on worms, grubs, bugs, berries and seeds that they find with their excellent sense of smell. Kiwis are the only birds that have nostrils on the tips of their beaks. Most birds have nostrils closer to their faces.

Kiwis sometimes mate for life. Often, though, the female will find a male she likes better and leave her current spouse.

Kiwis have one of the largest egg-to-body weight ratios of any bird. On average, an egg is 15 percent of the female's body weight, according to the New Zealand Department of Conservation. It can be up to 20 percent of her body weight, though, which is comparable to a 120-lb. (54 kg) woman giving birth to a 24-lb. (11 kg) baby, according to the San Diego Zoo. The female lays one to two eggs at a time, up to three times per year.

Eggs have antibacterial and antifungal properties to ward off bacteria and fungi that are common in the soggy areas of New Zealand. The male in the pair will sit on the eggs until they hatch. The incubation period of a kiwi egg is 75 to 85 days.

Unlike other birds, chicks kick their eggs open and are covered in feathers as soon as they hatch. They look like tiny versions of their parents. After a few days, the chick will leave the burrow and hang out with dad for around 20 days. After that, they may stay in their parent's territory for a while or trek out to find their own.

Here is the taxonomy information for kiwis, according to the Integrated Taxonomic Information System:

New Zealand is losing around 2 percent (around 20 per week) of unmanaged kiwi every year, according to the New Zealand Department of Conservation. There are around 68,000 kiwi total in New Zealand.

Kiwis have a body temperature of 100 degrees Fahrenheit (38 degrees Celsius), the lowest of any bird, according to the San Diego Zoo.

These birds get their names from the sound of their calls. They communicate with others by making "kee-wee, kee-wee" sounds.

The small, fuzzy Chinese gooseberry, native to south Asia, was introduced into New Zealand in 1908, according to Purdue University. Growers there in the 1960s began calling it "kiwifruit" to give it more market appeal.