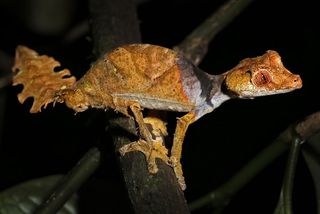 Madagascar, a large island in the Indian Ocean,may have only 1 percent of the world's land area, but it has an outsize 3 percent of its species. It is among the most diverse places for life on Earth.

But the process that put Madagascar on this list — the evolution of new species — may have slowed down, a new study suggests.

When it comes to the island's impressive biodiversity, "the formation of new species does not seem to be playing as important a role as it (did) in the past," Daniel Scantlebury, a doctoral student at the University of Rochester in New York who studied this process on Madagascar, told LiveScience.

Scantlebury's research suggests the island's wealth of species is, in fact, a legacy of more ancient times when new species evolved more frequently than they do today.

Looking back with DNA

To figure out how rates of speciation changed on the island over time, Scantlebury used previously collected genetic data to construct family trees for seven groups of Malagasy (meaning from Madagascar) reptiles and amphibians.

These groups included Brookesia, tiny chameleons that pass as dead leaves; Cophylinae, a diverse group of frogs, some of which are little bigger than a fingernail; Phelsuma, impossibly bright geckos; and Uroplatus, commonly called leaf-tailed geckos. One of "nature's dark dreams," the latter geckos can blend into the sides of trees or mimic dead leaves, Scantlebury said. (One species is even known as the satanic leaf-tailed gecko.) [Photos: Wacky Madagascar Animals]

Here's how the detective work was done: DNA sequences in organisms accumulate mutations over time; these can be used to determine the amount of time since two species diverged from a common ancestor. Scantlebury used this approach to look at the rate of evolution of new species in each of these groups going back to the root of the family tree, which is the last common ancestor for the living members for each of the seven groups.

Only so much room

"The fundamental question I am trying to ask is if there are limits to the amount of diversity Madagascar can have," Scantlebury said.

He found evidence of an answer in the changes in the rate of evolution of new species.

His results showed that this rate slowed over time on the island, and a finer analysis of this point suggested the rate slowed as more species evolve, he told LiveScience.

"The fact the rate is so intimately connected to levels of diversity is what suggests there is an upper limit to diversity," Scantlebury said. This means the island can hold only so many species.

The current theory to explain this phenomenon says resources on a relatively young island like Madagascar once was are abundant, but as species emerge they take up progressively more of them, reducing the amount available until nothing is free to support new types of residents. By comparison, continents are much larger and more complex, so it's harder to imagine that biodiversity could hit an upper limit, Scantlebury told LiveScience.

Geologists think Madagascar, the planet's fourth-largest island, has been isolatedfor about 90 million years.

Because Scantlebury's study focused on diverse groups of reptiles and amphibians that live in most of the island's habitats and evolved at different times, he said his findings likely reveal a general phenomenon on the island — one also seen at work in Malagasy birds known as vangas. Meanwhile, a separate study of Malagasy vertebrates (animals with backbones) found groups became more species-rich over time but did not look for an upper limit on diversity.

Madagascar is in the midst of a biodiversity crisis, with species threatened by human activities including deforestation and hunting.However, humans played no role in Scantlebury’s results, because the timeframe in question is far too long to show such recent effects. [8 of the World's Most Endangered Places]

While the reptile and amphibian family trees stretch back over tens of millions of years — the amount of time varies with the group of animals — humans have been on Madagascar for only about 2,000 years.

"My results indicate diversification has steadily slowed over millions of years. This does not mean humans are not butchering species wholesale, or that we are not a serious problem for the future of biodiversity – we are," he told LiveScience.

His study was published online (July 10) in the journal the Proceedings of the Royal Society B.