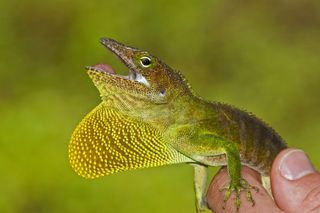 An adult male anole lizard (Anolis garmani) from Annotto Bay, Jamaica, that lives in the tops of trees. It is very similar to other lizards on nearby islands thanks to convergent evolution.
(Image: © D. Luke Mahler / Science)

If you could rewind time and watch evolution take place all over again, would it happen the same way as it did before?

This question has long puzzled thinkers like legendary evolutionary scientist Stephen Jay Gould, who proposed that evolution was "utterly unpredictable and quite unrepeatable." But a new study of Caribbean lizards published today (July 18) in the journal Science suggests that, at least in some circumstances, evolution may be more predictable than previously thought.

It is, as you might imagine, difficult to test what would happen if you could rewind and replay the "tape of life," said Luke Mahler, a study author and researcher at the University of California, Davis. In lieu of time travel, Mahler and his co-authors turned to the Caribbean islands. All of the lizard diversity on four major islands — Cuba, Jamaica, Hispaniola (home to Haiti and the Dominican Republic) and Puerto Rico — arose from a single species as individuals rafted to these spots on logs and other debris over the course of millions of years, Mahler told LiveScience. In other words, it's the perfect natural laboratory to see what might have happened if evolution repeated itself four separate times.

It turns out that each island has a surprisingly similar mix of a type of lizards called anole lizards. This mix clustered into groups with comparable traits. On each island, there are, for example, trunk-crown specialists, anoles that hang out where the tree trunk meets its upper foliage (the crown) — an ideal setting to forage for insects, Mahler said. [Album: Bizarre Frogs, Lizards and Salamanders]

Each island is also home to "twig specialists," which are "little bitty cryptic guys, gray- or lichen-colored, with tiny prehensile limbs, that creep almost undetected on twigs," Mahler said. Interestingly, these weren't discovered until the 1960s, despite the fact that the Caribbean had been very well explored, biologically speaking. (The key to finding them is to shine a flashlight on twigs at night; their bodies give off a slight gleam in the light, Mahler said.)

The study is a textbook case of convergent evolution, a common evolutionary phenomenon in which different species develop similar adaptations that allow them to fill a niche, or way of living, that was previously unexploited in a particular area.

When the first anole lizard landed on each island, there were no other anoles, and they faced a "paradise of possibilities," Mahler said. But it turns out they ended up carving out the niches quite similarly on each island.

What does it mean?

So what does this mean for the evolution of other organisms elsewhere? It means that evolution can be somewhat predictable, conforming to specific features of an "adaptive landscape"— the traits that allow any one species to survive and thrive in a certain place. But applying this elsewhere is difficult, Mahler said.

"Ecological factors really do shape macroevolution over long time periods," Mahler said. "But in cases where you don't have simple (geographic) units like islands, there might be too many complicating factors" to figure out how "repeatable or predictable" evolution might be, he added.

While Gould likely would have acknowledged that convergent evolution can similarly shape the diversification of species on islands, he'd likely "doubt if the radiation as a whole would be repeated in the same way following a hypothetical mass extinction," said Peter Grant, a Princeton University researcher who wasn't involved in the study. "I am sure it has relevance to animal evolution elsewhere, but it's not easy to demonstrate that so convincingly on such a scale as the Caribbean anoles."