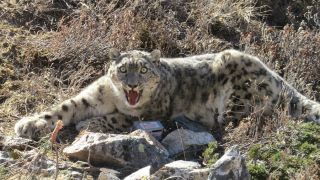 In a first for Nepal, scientists captured and collared an elusive snow leopard to track the movements of the endangered cat. This male snow leopard was captured using a foothold snare. Conservationists say it was not harmed during the capture on Nov. 25, 2013.
(Image: © © Kamal Thapa/WWF Nepal)

Scientists outfitted an elusive snow leopard with a GPS collar in Nepal, a first for the Himalayan country, the World Wildlife Fund (WWF) announced today.

By tracking the movements of the spotted cat, conservationists hope to learn more about the ecology and behavior of the species to make better decisions about protecting the endangered animals.

The 5-year-old male snow leopard was captured in a snare in eastern Nepal's Kangchenjunga Conservation Area on Nov. 25, 2013. Named "Ghanjenzunga" after a local deity, the cat weighs 88 lbs. (40 kilograms) and measures 6.3 feet (193 centimeters) from the base of its head to the base of its tail. After being sedated, the cat was fitted with a GPS Plus Globalstar collar and released back into the wild. [See Photos of the Captured and Collared Snow Leopard]

Ghanjenzunga will wear the collar until the end of 2015, WWF officials said. The satellite tech will allow scientists to track which habitats the cat prefers and which corridors it uses to get to those places.

"Snow leopards are highly elusive creatures and given the terrains they reside in, monitoring work on the species is a highly challenging task," Narendra Man Babu Pradhan, who is coordinator for development, research and monitoring at WWF Nepal, said in a statement. "While past studies on the snow leopard have been limited to areas that are accessible to people, this technology will help provide important information on the ecology and behavior of the wide ranging snow leopard."

While the cats had been tracked with VHF radio collars in the early 1980s and '90s, this is the first time satellite-GPS technology is being used to track snow leopards in Nepal, according to WWF officials. Last year, scientists outfitted two male snow leopards with GPS collars for the first time in Afghanistan.

Snow leopards roam through rugged mountain regions across 12 Asian nations and their numbers have been shrinking. The International Union for Conservation of Nature (IUCN), often considered the world's main authority on the conservation status of animals, lists the snow leopard as an endangered species and estimates that its total population in the wild is 4,080 to 6,590.