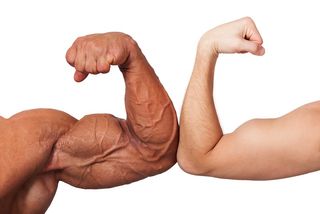 Although it’s often assumed that males who feel they are "manly" men are more likely to engage in violence than those who are less concerned about their masculinity, men who feel they don't meet perceived masculine gender norms and are stressed about it may be equally prone to violent acts, a new study finds.

Researchers found that men who feel they fall short of society's "macho man" standards and are unhappy about it may be more likely to commit violent assaults using weapons than men who are comfortable with their masculinity.

In general, men are more likely than women to suffer from poor health and injury, likely because they tend to gravitate toward riskier behavior, the researchers said. Men typically are more prone than women to engage in substance abuse, binge drinking, reckless driving, violent acts and to carry weapons than women. [5 Myths About the Male Body]

The researchers tested their theory that men’s dangerous, risk-taking behavior stems from insecurity with their masculinity; when a man perceives himself to be less masculine than traditional societal standards and feels that others see him the same way, he is said to have “gender role discrepancy,” and the tension he feels is known as “discrepancy stress.”

In 2012, the scientists conducted an online survey that probed how the male participants perceived masculinity standards and how their own self-image fit in with this perception. The 600 male participants, who were paid $2, were asked whether they felt as masculine as the average guy or if they wished to be more macho. The survey also included information about the individual's substance use and violent behavior.

The researchers found that the men with high discrepancy stress were more likely to be violent than the men who were not as concerned about their masculinity. The two groups, however, were not likely to differ significantly in their alcohol and drug use, the scientists said.

The researchers did not provide participants with a set standard for masculinity. In some cases, survey respondents interpreted "being macho" as being aggressive and hypersexual, while others saw it as being a good husband and father, said Dennis Reidy, the study’s lead author and a behavioral scientist at the Centers for Disease Control and Prevention.

The ages of the American survey participants ranged between 18 and 50 years, the researchers said, and the distribution of the respondents' ethnicities and incomes was consistent with the general population in the United States — 72 percent Caucasian, 13 percent Asian, 7 percent African-American and 7 percent Hispanic.

The participants had a median annual income of $37,000, although the most frequently reported income was $55,000, and salaries ranged from $5,000 a year to more than $100,000. The average age skewed slightly younger, at 27.2 years. The participants were also slightly more educated than the general American public, with the average participant having had some college education.

“These findings suggest prevention of discrepancy stress may likewise prevent acts of violence with the greatest consequences and costs to the victim, offender and society,” the researchers wrote in the study.

Although there was a strong association between perceptions about masculinity and propensity to violence, there was no association between discrepancy stress and the average daily use of alcoholand drugs, the researchers found. However, men who felt less masculine and were not worried about it were the least likely to report violence or driving while intoxicated.

The researchers suggest that efforts to reduce men’s risky behavior should focus on how men internalize society's masculinity standards, and how these standards can cause stress in boys and men.

The findings also show that different kinds of men — those who feel they are very masculine and those who don’t see themselves as masculine enough and are upset about it, for instance — may need different types of intervention strategies, Reidy told Live Science.