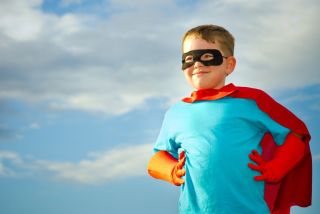 Preschoolers exposed to more superheroes showed these patterns of play even when parents made a point of talking with them about their media consumption, the study found.

"These type of programs may be contributing to what I call the hypermasculinization of American society," said study researcher Sarah Coyne, a professor of family life at Brigham Young University. This hypermasculinization celebrates tough, aggressive behavior and tells boys to quash their emotions, Coyne told Live Science. [Busted: 6 Gender Myths in the Bedroom & Beyond]

But parents shouldn't necessarily ban Batman yet. Teasing out the effect of media on behavior can be tricky, warned Chris Ferguson. The psychologist, who is at Stetson University in Florida, specializes in media violence and was not involved in the study.

"There's no evidence here that it's a public issue, that it's something that impacts, in a more broad sense, our behavior or mental well-being," Ferguson said of superhero shows.

Coyne was in the midst of researching the influence that Disney princesses have on preschool girls when she decided to take a closer look at the type of media boys commonly consume.

"You can't get away from superhero culture at the preschool age," she said. "They just love it. It's at every birthday party."

Superheroes, even the female ones, tend to conform to traditional masculine stereotypes. They're muscular, bold, strong and aggressive. Recent reboots, like the 2008 Batman flick "The Dark Knight," take the genre into particularly dark, gritty territory.

Despite the PG-13 rating for that movie, the publicity around "The Dark Knight" included marketing geared for kids, said Mark Tappan, a professor of education at Colby College in Maine. Tappan, the co-author of "Packaging Boyhood: Saving Our Sons from Superheroes, Slackers, and Other Media Stereotypes" (St. Martin's Press, 2009) was not involved in Coyne's work.

Mattel developed a line of Dark Knight action figures, Tappan said, and Batman toys were sold with kids' meals at fast-food restaurants as part of the movie tie-in.

To investigate whether superheroes influence young children, Coyne recruited 134 parents (mostly moms) to fill out surveys about their 3- to 6-year-olds' superhero show and movie viewing habits, as well as patterns of play. A year later, she approached the same parents and asked them to answer the same set of questions. One hundred and five completed the follow-up.

Overall, little boys were more likely than girls to view superhero shows and movies, though they varied considerably. About 20 percent of the boys never watched superhero media, while 20 percent watched it once a week or more. The rest of the boys fell in between.

In contrast, almost half of little girls had seen superhero shows or movies only once or never, and only 2 percent watched superhero media once a week or more.

Boys who watched more superhero media had higher rates of playing with pretend weapons, as well as higher rates of playing in stereotypically male ways (play wrestling, for example, versus playing dress-up). This was true even after the researchers controlled for the level of boyish play at the first time point, showing that increased levels of boyish play followed after watching more superhero shows. The researchers also controlled for television violence exposure in general.

Superheroes didn't influence girls' levels of gendered play, but did make them more likely to play with weapons, the researchers reported online May 8 in the journal Sex Roles.

Coyne and her colleagues also asked parents whether they frequently talked to their kids about the things they saw in movies and on television. Surprisingly, the kids who got these lectures frequently were no less likely to play with weapons or to play in gender-stereotyped ways than kids who didn't. For girls, parental chats even strengthened the likelihood they would play with weapons.

"As a parent of a preschooler … I was disappointed!" Coyne said.

However, Stetson University's Ferguson warned parents not to panic about the results. The longitudinal design of the study, in which the kids were followed over time, was a strength, he told Live Science, but still does not preclude the possibility that some other variable is responsible for both the superhero viewing and the stereotyped weapons play in boys. For example, Ferguson said, a genetic tendency toward those masculine traits could drive boys toward both. Studies of media violence that have controlled for genes related to aggression have found that once those genes are taken into account, the association between watching violence and enacting violence disappears, he said. Something similar might be going on in young children who love superheroes.

Other factors could have also influenced the findings, Ferguson said. Parents may have received clues about the purpose of the study and may have been subtly swayed to answer in such a way as to back up the study's thesis. Having a second parent or caregiver answer the questions would have made the findings stronger, he said.

The effect of the superhero shows also appears fairly small, Ferguson said. "They're there, but they wouldn't be the sort of effect that one would notice very readily in the real world," he said.

There is also great debate among psychologists about whether gendered play or weapons play is a problem. Ferguson is skeptical.

"Weapons play is something that kids have done throughout history," he said. "If it wasn't guns today, it was swords, or whatever they had in ancient Egyptian times." [Fight, Fight, Fight: The History of Human Aggression]

Coyne, however, sees reason for concern.

"Generally, we find that when people subscribe to greater gender stereotypes, it's problematic," she said. "You're more likely to subscribe to a culture of dominance and violence."

Coyne is interested in looking at these effects in the long term.

"This is a one-year study, so who knows?" she said. "I'd love to do a long-term study to find out, the kids who are really into superheroes at age 4, what are they like as 10-year-olds, as adolescents, as young adults?"

In the meantime, parents may need to use their best judgment when deciding whether little Timmy is allowed to watch Spider-Man. Coyne was quick to note that superheroes are not all bad — "I feel like America is going to hate this study, because we love superheroes so much," she said — and that they also model standing up for the weak and defending the forces of good. In fact, her next step is to examine whether superhero-loving kids are more likely to intervene to protect other kids from bullies.

Despite the finding that parental guidance didn't alter kids' play, Tappan advised parents to keep talking with their kids.

"Parents have a responsibility to really engage their kids in conversation about all the media they're encountering," he said. "I wouldn't want this to turn parents away from taking that on."

And, of course, there's no substitute for common sense. "The Dark Knight" franchise is rated PG-13 for a reason, after all.

Superheroes "can be a force of good, and they're moral exemplars, all these great things, but for the preschool age, 3 and 4, they're just not picking up on that," Coyne said. "It's the developmental thing I'm concerned about."