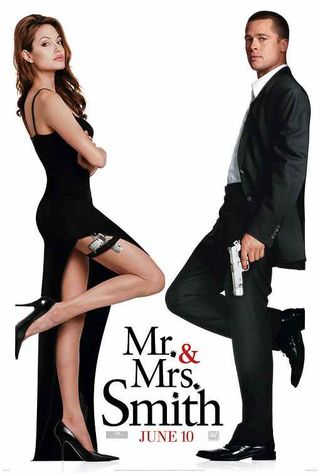 Watching Angelina Jolie kick robot butt in the 2001 movie "Tomb Raider" makes viewers expect real-world women to be both bold and beautiful — an ideal that has been linked to disordered eating.

College students who watched clips of beautiful and aggressive women such as Jolie were more likely than others to endorse the so-called "superwoman ideal," the notion that women should excel in traditional feminine roles such as beauty and nurturing while also shining in traditionally male areas such as aggression. In contrast, those who watched the less conventionally attractive Kathy Bates acting out an aggressive scene tended not to buy into these "have it all" expectations.

"It's pretty clear when you look at the content where this comes from," study researcher Laramie Taylor, a communications professor at the University of California, Davis, told LiveScience. "Lara Croft in 'Tomb Raider' kills the robots and kills people and steals the treasure and still looks like Angelina Jolie in makeup at the end. It's fine for the movies, but what we show is that those expectations seem to transfer to audiences."

Americans spend hours each day interacting with media such as movies and television, Taylor said. Previous studies have shown that the stereotypes delivered through the boob tube can influence people's outlook on the world. One study, published in 2002 in the journal Personality and Social Psychology Bulletin, found that watching commercials depicting women as obsessed with shopping and beauty made viewers more likely to see women as bad at math. After watching those commercials, the women in the study expressed less interest in math-based careers.

Taylor and his co-author, then-undergraduate student Tiffany Setters, wanted to know how onscreen depictions of aggressive beauties such as Jane Smith (played by Jolie) of "Mr. and Mrs. Smith" or Beatrix Kiddo (played by Uma Thurman) of "Kill Bill" influenced people's views of women. They went looking for actresses who had played both aggressive and passive characters, Taylor said. [Read: Disney Princesses and Princes Still Slaves to Some Stereotypes]

"We started by trying to brainstorm who fit the bill and came up with a short list," he said. "Then, honestly, we just tried to select one that realized the closest conformity to stereotypes of beauty in the Western world and somebody that didn’t."

They settled on Jolie, playing a violent character in "Tomb Raider" and a passive character in the 2008 movie "The Changeling," and Kathy Bates, playing passive in  "Fried Green Tomatoes" in 1991 and aggressive in "Primary Colors" in 1998. Jennifer Garner was also under consideration, Taylor said, but the researchers decided that her non-aggressive romantic comedies introduced too many girly stereotypes into the mix.

The researchers then asked 65 college undergraduate women and 57 undergraduate men to watch one of four clips showcasing either aggression or passivity from Jolie's and Bates' characters. After watching the clips, the students answered questionnaires about their thoughts on the movies as well as their beliefs about gender roles.

The people who watched Jolie in action-hero mode were significantly more likely than viewers of other clips to say that women should meet the superwoman ideal of kicking butt and looking good doing it, the researchers reported online March 30 in the journal Sex Roles. Those who saw Kathy Bates threatening someone with a gun in "Primary Colors" leaned toward rejecting the superwoman ideal, though these results weren't statistically significant, Taylor said.

The researchers also found that beauty holds a lot of sway when people rank role models. All of the characters played by Bates and Jolie were protagonists, but both of Jolie's characters were ranked as better role models than Bates' characters. The character Lara Croft got the highest marks as a role model, followed by the passive, thwarted mother character in "The Changeling." Bates' Libby Holden from "Primary Colors" was ranked as the worst role model.

"Being stereotypically physically attractive seemed to produce a sort of halo effect," that made people like the character more, Taylor said.

"I find that a little troubling in this day and age that the number one predictor of 'Is she a good role model?' is 'Is she pretty?'" he said.

There are limitations to the study, Taylor said, including a study group made up only of college students. It's also difficult to tease out whether people are influenced by the actresses' aggression or some other factor, such as their confidence, he said. Figuring out which factors are involved is complicated by Hollywood inequality, Taylor said.

"Men outnumber women in movies by a wide margin, especially as central characters and especially as strong characters," he said. "When you look at the roles that stereotypically attractive women are given … if they're strong, assertive characters they're also often violent."

Taylor plans to continue research to scrutinize the influence of assertiveness versus aggression. The effect he and Setters found may fade over time, he said, but given people's repeated exposure to media messages, it likely gets renewed again and again. Women's own expectations that they live up to superwoman standards have been linked in several studies to eating disorders, and such expectations may also influence self-esteem and confidence, he said.

"If I could give one take-away message," Taylor said, "it would be to consume media with a healthy dose of skepticism."