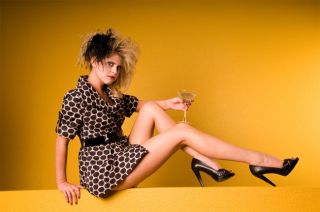 The idea that teen girls are driven to anorexia or starvation diets trying to look like thin celebrities and fashion models they see in women's magazines has become a cliché. Of course, it's no secret that professional photographs — of men and women — are routinely manipulated.

Fashion magazines have long been criticized for promoting unrealistic, airbrushed images of beauty that no girl or woman could possibly live up to. The fight against digitally altered images was recently taken up by Lynne Featherstone, the British equalities minister, who vowed to convene hearings to address the use of thin fashion models and photographic retouching, which she argues is contributing to "the dreadful pressure that young people, girls and women come under to conform to completely unachievable body stereotypes." She will push for a health warning to appear on airbrushed photographs, informing viewers that the images have been manipulated and are not realistic.

A recent British poll suggests that Featherstone's proposed warning labels are unnecessary. A cosmetic surgery website, Good Surgeon Guide, conducted a poll of 1,078 teenage girls to discover how they feel about airbrushing and other digital manipulation of photos in fashion magazines.

Contrary to popular assumption — and minister Featherstone's — the poll reveals that nearly 90 percent of girls are aware that the majority of celebrity images are airbrushed, and not an accurate representation of the celebrities' appearances.

For example, 71 percent respondents said that images of Britney Spears were regularly airbrushed, and 69 percent believed that photos of Kim Kardashian were modified and unrealistic. Others asked about in the poll included singer Fergie (48 percent of teens thought her photo was airbrushed); Jessica Simpson (49 percent); and Sarah Jessica Parker (44 percent).

Since nine out of 10 girls polled already know that most celebrity photographs are neither realistic nor achievable, they certainly don't expect to look like them. The findings are in line with earlier research suggesting that teen girls reject fashion models as realistic role models. For example, according to a 1999 survey ("Pressure to be Perfect? Young Women's Research Report"), of 901 British women between the ages of 18 and 24, almost 90 percent said they would not want to look thin like Kate Moss. When girls were asked what they thought about the typical fashion model's body, 65 percent stated it was "too skinny." Nearly as many said it was unrealistic, 47 percent said "unhealthy," and nearly a third said the body shape was "sick."

A 2004 study conducted for Dove's "Real Truth About Beauty" campaign found that most women reject the thin fashion model body type: "Findings affirmed that women around the world are able and willing to embrace a conception of beauty that defies the narrow, physically-focused standards set for them by popular culture.," the authors write in an article about the study. That study also found that 90 percent of women were satisfied with their physical attractiveness and beauty.

This latest poll is good news for parents who worry about the self-esteem and mental health of their teen daughters. It seems that teen girls are much more savvy than adults give them credit for. Indeed, as feminist author Naomi Wolf notes in the introduction to her book "The Beauty Myth" (Anchor Publishing, 1992), "Today you would be hard-pressed to find a twelve-year-old girl who is not all too familiar with the idea that 'ideals' are too tough on girls, that they are unnatural, and that following them too slavishly is neither healthy nor cool." Amen.