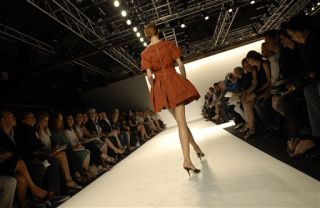 Fashion models at Canada's Montreal Fashion Week (Oct. 9–11) take note: You won't be allowed to strut the runways if you're too thin.

The move reflects a growing concern in the fashion industry. Show organizers in Paris, Milan, and around the world are responding to criticisms about the women who model each season's fashions. Recently the British Fashion Council recommended that models be screened for eating disorders; starting September 2008, models will be required to provide a medical certificate showing that they are not anorexic.

In principle, it sounds like a good idea. But the reality is that testing fashion models is little more than an unnecessary, cosmetic fix.

There is no way to physically "screen" models for anorexia. Instead, the women would be asked a series of questions, which—like drug use or any other topic the model may not want to admit to—could be easily evaded. It is possible to determine if the models are malnourished, but that doesn't settle the issue. While thinness is often associated with malnutrition, many thin (even anorexic) people are properly nourished—and even obese people can be malnourished.

Not only is the health screening impractical, but in America, such measures might be illegal. An employer can't fire someone from a job or discriminate against that person because he or she has a disease.

The efforts to curb anorexia are well-intentioned but often misguided. Deaths from anorexia are very rare, even in the fashion world. Models are in far greater danger of being killed in a car driving to the fashion show than dying of anorexia. Though anorexia has the highest mortality rate of any psychiatric disease, only one-half of one percent of anorexics die from it each year, and many of those deaths are actually suicides.

Nor will keeping very thin models off the runways do anything to curb the disease at large. Anorexia is widely misunderstood, and while thin fashion models are often blamed for contributing to eating disorders, the link is based far more on assumption than fact.

Anorexia is a complex psychological disorder; young women can no more "catch" anorexia from seeing thin models than they can "catch" depression from watching an actress cry in a film. Furthermore, if thin models somehow caused anorexia, why is the disease so rare? Hundreds of millions of American girls and women see thin actresses and models every day in the media, yet fewer than one percent of them develop anorexia. Decades of research suggest that the disorder is primarily genetic, not environmental.

The real tragedy is that, because of the many myths about anorexia, much of the public's attention is being misguided. If the money and resources spent screening fashion models went to study the real causes of anorexia instead, we would be much closer to finding effective treatments.

Benjamin Radford is LiveScience's Bad Science columnist, managing editor of Skeptical Inquirer magazine, and author of three books. An article on the link between models and eating disorders will appear in the upcoming issue of the journal Scientific Review of Mental Health Practices. His books and films can be found on his website.