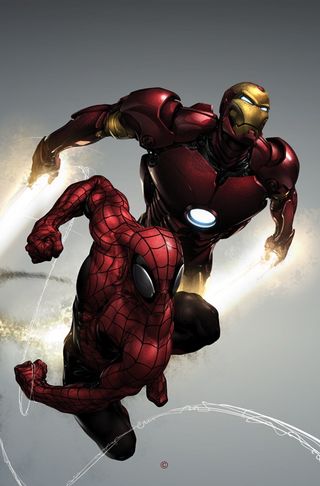 Sometimes superheroes such as Spiderman and Iron Man have to fight the battle within.
(Image: © Marvel)

NEW YORK – There may be a hero in all of us, but there's also a possible supervillain waiting to run amuck if one of us were to acquire superhuman strength or the ability to fly. In a society that reveres superheroes, just how many people could follow the do-gooder's path if they were suddenly bitten by the radioactive spider?

That thought may not weigh heavily on the costumed attendees of New York City's Comic Con that kicked off today (Oct. 8). Yet the odds for ordinary people becoming superheroes rather than villains don't look great when news headlines frequently tell stories of corruption among those with power – politicians, law enforcement and business leaders. And everyone has witnessed the more petty abuses of power that take place in workplaces and on the playground.

Yes, power does corrupt, researchers say. But they add it can also enhance a person's preexisting goals and moral compass, for better or worse.

"That's where you can predict the supervillain or superhero," said Adam Galinsky, a social psychologist at Northwestern University. "The average person is corrupted by power, but a select few see power as responsibility."

Power is relative depending on a person's place in the social hierarchy, Galinsky pointed out. Humans have great sensitivity to their place on the social ladder, as well as great awareness of where others stand (or soar above them in the case of Superman).

A person's move up in a hierarchy has a transformative effect so that "power makes the person," Galinsky said. That transformation stems in part from a person's enhanced self-perception – and studies have shown that people consistently overestimate their smarts or looks anyway.

But power also acts like strong cologne that affects both the wearer and those within smelling distance, Galinsky noted. The person gains an enhanced sense of their importance, and other people may regard them with greater respect as well as extend leniency toward their actions. That combination makes for an easy slide into corruption.

The idea that power corrupts was summed up by the Greek philosopher Plato, who talked about an imaginary "Ring of Gyges" that could turn the wearer invisible. Plato suggested that no one could escape the corrupting influence of having the power to do anything without being caught – a sort of earlier version of "Lord of the Rings," Galinsky said.

"Power makes people feel psychologically invisible," Galinsky told LiveScience. "It's ironic, because in many ways they become more visible to other people."

Galinsky and other researchers have shown how people who feel entitled to their power became moral hypocrites by holding other people to higher moral standards for speeding or breaking tax laws – even as they judged themselves less harshly for the same actions.

Revealing the true self

Yet not everyone who suddenly gets a flying Iron Man suit will embark on a selfish reign of terror. One of Galinsky's studies found that people who felt powerful but undeserving of such power would actually judge themselves more harshly than other people for the same wicked actions – a reversal of hypocrisy that was dubbed "hypercrisy."

That study relied on a priming effect to make people feel temporarily more powerful, and so it's uncertain whether such hypercrisy might hold over the long term. But other research has suggested that a person's prior moral convictions can come out even more strongly when they suddenly gain power.

"Plato talked about how true power makes the person in terms of transforming and changing him or her, but power also reveals the person," Galinsky said. "My research and other people's research have shown that, in many cases, power makes you more how you truly are."

One such study took place at the University of California in Berkeley under psychologist Serena Chen. Her group first used personality tests to sort out people who had a strong sense of communal responsibility versus those who took the business-like approach of "You scratch my back, I'll scratch yours."

When given the power and authority to dole out tasks to a group, the communally oriented people willingly shouldered the responsibility of tackling more tasks themselves. By contrast, the more self-centered people took on less.

Personality matters, but upbringing, culture and other circumstances also play a role in deciding whether a person will abide by the moral Uncle Ben set down for Peter Parker: "With great power comes great responsibility."

Whether or not a person has the high social standing and wealth of Iron Man's Tony Stark or Batman's Bruce Wayne could also make a difference, according to Robin Rosenberg, a clinical psychologist and author of several existing and forthcoming books on superheroes. She sat on two panels for Comic Con where she discussed the personalities of Iron Man, Batman and Spider Man.

"If your life is generally good and you get a power, it's much easier to want to do good [for others] with it than if your life is very constrained," Rosenberg said in a prior phone interview.

A poor person might have legitimate reason to focus first on their needs, Rosenberg explained. By that logic, the recent economic recession might make a huge difference regarding who would chose to become a superhero or supervillain if they gained superpowers today.

Even age could influence how a person uses the newfound power of, say, X-Ray vision.

"A 20-year-old may go to the locker rooms and look through the walls," Rosenberg said. "I don't know that a 50-year-old would."

How to stay a hero

Whatever their background, few people have faced the enormous temptations that confront superheroes endowed, by science or other forces, with amazing superpowers. Many comic books and films have illustrated that battle with temptation among well-known superheroes such as Batman and Spiderman.

But superheroes do have some help in staying focused on the righteous path, according to Rosenberg.

"You could make a case that having a secret alter ego that's a regular person is part of what keeps them grounded," Rosenberg explained. "It's like the rock star having to take out the trash."

For instance, Spiderman may spend much of his time web-slinging around New York City and fighting crime with exceptional strength, but most of the time he's just plain old Peter Parker struggling to eke out an everyman existence.

"To me, Peter Parker is the audience," said Fred Van Lente, a writer of The Amazing Spiderman comic books for Marvel, during a Comic Con panel today.

Finally, the most powerful superheroes may have to make superhuman effort to act morally – not just for themselves but also for the public that trusts them as defenders of justice, Rosenberg said. The same might apply for trusted authorities or law enforcement such as the FBI.

She gave the example of Superman, whose long list of powers such as superhuman speed, X-Ray vision, flight and invulnerability to just about everything, make him powerful enough to take over the world. Because of that power, he sets an unmistakable moral standard – a bright line that he won't cross.

"Because they have more power, their moral line should be clearer, brighter and farther away," Rosenberg said. "So there's a sense in which in order not to be more corrupted, they need to use power more gently."

Anyone who has a strong opinion on what is a superhero can take a survey at Rosenberg's website here.