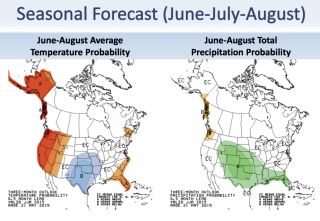 Forecasts for June, July and August in the United States suggest temperatures will be cooler than usual in the central Plains.
(Image: © NOAA)

The West can expect its warm and dry weather to continue through the summer, while the central Plains will be relatively cool and wet, according to a summer forecast released today (May 21).

The East will be slightly warmer than average, and drought will intensify in the Northeast and the Pacific Northwest, a pattern that's typical of El Niño summers, the National Oceanic and Atmospheric Administration said.

Texas and Oklahoma have already felt the force of El Niño-influenced weather, NOAA said in a briefing today. Both states were in a severe drought last year, but this spring, drenching rainstorms refilled the states' parched reservoirs to near capacity. Kentucky also saw a soaking spring, recording its second wettest April on record. "This pattern is partially the effect of El Niño conditions," said David Unger, a forecaster with NOAA's Climate Prediction Center.

The Texas drought began in October 2010 and was the second-driest spell in the state's history, said Victor Murphy, a program manager for the National Weather Service's Southern Region. "It looks like the Texas drought is pretty much over," Murphy said. [The 5 Worst Droughts in US History]

In summer, a strong El Niño often steers heavy rainstorms toward the southern Plains states and the intermountain West, including Texas, Oklahoma, Colorado, Arizona and New Mexico. However, the summer forecast calls for dry conditions in the West and Alaska, Unger said.

An El Niño also tends to tamp down Atlantic hurricane activity and boost Pacific hurricanes; NOAA plans to release its hurricane forecast on May 27.

The El Niño is a cyclic climate phenomenon that involves both the ocean and the atmosphere. One of its hallmarks is warmer-than-average sea-surface temperatures in the tropical Pacific Ocean. Although the El Niño fizzled last winter, the pool of warm water stuck around this spring and strengthened into a full-blown event.

With an El Niño brewing in the Pacific, the warm tropical ocean surface has been helping set new global heat records this year. Global temperatures in April 2015 were the fourth warmest on record since 1880, said Jake Crouch, a NOAA climatologist. And the first four months of 2015 shattered old heat records.

During January through April, the average temperature across land and ocean surfaces was 1.44 degrees Fahrenheit (0.8 degrees Celsius) above the 20th-century average. This surpassed the previous record, set in 2010, by 0.13 F (0.07 C).

"2015 is very warm compared to other years," Crouch said. "It has been really quite a bit ahead of the pack."