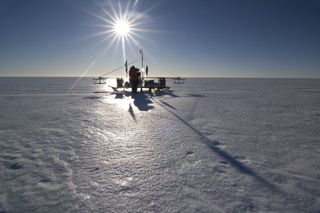 One of the fastest-warming places on the planet, the Antarctic Peninsula, has lost two massive ice shelves in the past 20 years: the Larsen A and the Larsen B. Each floating tongue of ice disappeared in a matter of weeks.

No one knows for sure why the ice shelves collapsed, but a new study finds the remaining Larsen C ice shelf is melting from more than just toasty air. This ice shelf is also disappearing due to warming in the ocean, scientists reported May 12 in the journal The Cryosphere.

"We know there is strong atmospheric warming in this region," said lead study author Paul Holland, a climate scientist with the British Antarctic Survey. For instance, this summer, the Antarctic Peninsula set new heat records. But until now, no one thought the ocean played a role in the collapsing ice shelves, Holland added. "On the Larsen C ice shelf, we see 4 meters [13 feet] of ice loss that can't be explained solely by atmospheric warming," Holland told Live Science.

The Larsen C ice shelf is a flat plain of floating ice slightly smaller than West Virginia. It is fed by land-based glaciers flowing off the Antarctic Peninsula, and is the largest ice shelf in the region. [See Stunning Photos of Antarctic Ice]

The research team monitored thickness changes in the ice shelf between 1998 and 2012, using satellites and ground-based radar. The scientists saw Larsen C lose thickness in two ways during this period.

First, air escaped from the old snow layer on top of the ice. This old snow, called firn, has tiny, permeable air pockets that help it insulate the ice underneath like a down comforter. In summer, meltwater can trickle down through the snow like syrup through a frozen treat. The firn loses thickness when it melts down, and the air is lost. If the firn freezes into ice, meltwater ponds on the surface and absorbs sunlight and heat, driving further melting.

The Larsen B had completely lost the air in its firn layer before the shelf's catastrophic collapse in 2002, Holland said.

Second, the researchers think that Larsen C is also melting from below. During the 14-year study, the ice shelf surface lowered by an average of 3 feet (1 m). The surface lowering could simply be from the compacting snow, but the ground-based radar can reveal how much air is in the firn, Holland said. By measuring the air levels, the scientists determined the ice itself thinned by an average of 13 feet (4 m) between 1998 and 2012.

"Larsen C is getting lower in the water due to loss of ice," Holland said.

This is the first time that melting from below has been fingered as a culprit in the Antarctic Peninsula's vanishing ice shelves. Warming ocean waters are nibbling away at ice shelves in West Antarctica, but atmospheric heat has been considered the main offender in the peninsula.

Holland said the study results suggest that Larsen C has decades before it is close to cracking up. "There is a great deal of uncertainty, but that firn is not going to compact on the time scale of my children's lifetimes," he said.

However, glaciologists are concerned that the Larsen C ice shelf could crack and retreat by detaching from a small island called Bawden Ice Rise. A crack is forming near the northern edge of the shelf.

"When Larsen A and B were lost, the glaciers behind them accelerated, and they are now contributing a significant fraction of the sea-level rise from the whole of Antarctica," David Vaughan, a glaciologist at the British Antarctic Survey, said in a statement. Vaughan was not involved in the study. "Larsen C is bigger, and if it were to be lost in the next few decades, then it would actually add to the projections of sea-level rise by 2100."