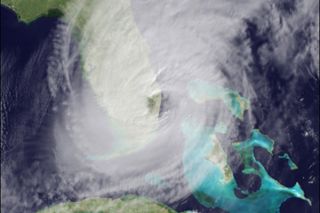 Hurricane Wilma seen by satellite as it crossed Florida in October 2005. Wilma was a Category 3 storm when it made landfall in the state and is the last major hurricane to hit the U.S. since that time.
(Image: © NOAA/NASA)

In a stroke of luck, no major hurricanes rated Category 3 or higher have struck U.S. soil during the past nine years, a new study finds.

This is the country's longest "hurricane drought" in recorded history, or since 1851, the researchers said. The previous record lull lasted eight years, from 1861 to 1868, they said.

Hurricane Wilma, a hurricane that hit Florida in 2005, was the last Category 3 storm to make landfall in the United States. Other storms — including Hurricane Ike (Category 2, 2008), Hurricane Irene (Category 1, 2011) and Hurricane Sandy (Category 1, 2012) — caused significant damage, but their winds weren't as strong. [A History of Destruction: 8 Great Hurricanes]

Several storms identified as Category 3 or higher have hit Cuba during the past nine years, but they substantially weakened by the time they reached the United States, the researchers found.

"There's been a lot of talk about how unusual the string is, and we want to quantify it," Timothy Hall, the study's lead author and a hurricane researcher at the NASA Goddard Institute for Space Studies in New York City, told the American Geophysical Union blog.

To investigate the odds of the nine-year hurricane drought, Hall partnered with Kelly Hereid, who works for Stamford, Connecticut-based ACE Tempest Reinsurance, a private company that insures insurance companies. Together, they used a computer model that looked at the major factors known to fuel or weaken hurricanes, such as storm-supporting high sea-surface temperatures in the Atlantic Ocean and hurricane-suppressing conditions in the Pacific Ocean, according to the blog.

The program allowed the researchers to simulate the years 1950 through 2012 1,000 times, so they could learn how often, under the known conditions, virtual hurricanes could hit 19 states that border or are near the Atlantic Ocean, ranging from Texas to Maine, the blog said. The results gave Hall and Hereid enough data to calculate the odds of a large hurricane hitting the United States, and the likelihood of a nine-year hurricane drought.

Roughly a quarter of all tropical cyclones in the North Atlantic hit the United States, Hall said. An analysis showed that the average wait time for a nine-year drought is 177 years, making it rare but not impossible, the researchers said.

What's more, there is a 39 percent chance that the hurricane drought could end next year — a bit higher than a one-in-three chance. The odds do not have a connection to the length of the hurricane drought, and are similar to a coin toss in that the outcome does not depend on what came before it.

"The current year forgets the year before," Hall said.

The findings suggest the hurricane drought isn't usual, but rather a matter of luck or chance, the researchers added.

"When we looked qualitatively at the nine-year drought, they aren't inactive seasons," Hall said. The researchers found no significant change in the number of North Atlantic tropical cyclones, the amount of energy powering them or any other hurricane metric, according to the blog.

In fact, the hurricane drought may last another year. El Niño, which has developed in the Pacific, can lead to strong winds blowing over the Atlantic. These strong winds can stall hurricane formation, the researchers said.

Interestingly, the lack of strong hurricanes has implications for insurance agencies. Oftentimes, small, boutique insurance companies will offer low rates during a hurricane drought, which nudges the larger companies to drop their rates, Hall said.

But a hurricane drought can end at any time, the researchers said, reminding people that, just because there hasn't been a strong hurricane in a while, that doesn't mean the risk is any lower.

The findings were published April 6 in the journal Geophysical Research Letters.