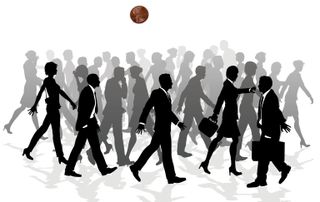 If a penny dropped from the top of a skyscraper were to hit you, it wouldn't really hurt.
(Image: © Christos Georghiou (crowd) | Mircea Maties (penny) | Shutterstock)

City-slickers: Have you ever worried that, at any moment, you could be struck dead by a penny flung off the roof of a nearby skyscraper?

You can rest easy — on that score, at least. In fact, it's extremely difficult to turn a penny into a lethal weapon, and hurling it over the barricades at the top of the Empire State Building won't get the job done. Even from that height, a penny is too small and flat, and cushioned by too much air, to become a missile.

Instead, it would flutter to the ground like a leaf. If it did strike you, it would feel like being flicked in the forehead — "but not even very hard," said Louis Bloomfield, a physicist at the University of Virginia. And he should know. He recently used wind tunnels and helium balloons to replicate the fall of pennies from skyscrapers. When experimental pennies struck him, it didn't hurt. "I think one bounced off my face once," Bloomfield told Life's Little Mysteries.

People often assume that a falling penny, subject to the force of gravity, will accelerate for the entirety of its fall, achieving breakneck speeds by the time it reaches the ground. This would indeed happen if New York City was evacuated — that is, if all the air were removed and the penny was tossed off the Empire State Building into a vacuum — but as things are, collisions with air molecules slow falling pennies down. Called a "drag force," air resistance opposes the penny's downward motion, counteracting the force of gravity. [6 Weird Facts About Gravity]

The faster the penny falls, the greater the air resistance it experiences, and so at a certain maximum velocity of the penny, the drag force becomes equal and opposite to the downward gravitational force. With the two forces balanced, the penny no longer accelerates. Instead it falls at a constant speed, called the terminal velocity, all the way to the ground.

Pennies are flat, so they experience a lot of air resistance, and they are light, so it doesn't take much drag to counteract their weight. Thus, if hurled off a skyscraper, pennies achieve their terminal velocity after only about 50 feet (15 meters) of descent. After that point, they flutter to the ground at a measly 25 mph (40 kph), Bloomfield said.

If there were no air, a falling penny would accelerate to a speed of 208 mph (335 kph) by the time it reached the ground (or your head). At that speed, it might very well damage your skull, but it wouldn't drill through.

"A penny is pretty much a little nothing," Bloomfield said. "It's not a very compact object. It doesn't drill into you very well."

But don't take off that protective head gear just yet. Falling ballpoint pens are the real danger. If someone nonchalantly tossed one of those off the top of the Empire State Building, it could kill. Depending on their design, pens will either spin and flutter, or shoot down like an arrow. In the latter case, "it might well come down at 200 mph," Bloomfield said. "When it hits, it will hit a small area with a lot of momentum. It will chip the sidewalk. It could punch into a wooden board. You wouldn't want it to hit your head."