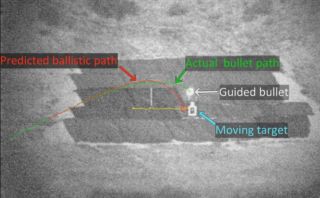 In what some might consider a terrifying development, the U.S. military has passed a key milestone in creating self-steering bullets.

Military snipers are often faced with having to hit moving targets in difficult conditions, such as high winds or dusty terrain like that found in Afghanistan. DARPA's Extreme Accuracy Tasked Ordnance (EXACTO) program was designed to increase snipers' accuracy in these situations, by improving their range and reducing the time required to hit a target. [Humanoid Robots to Flying Cars: 10 Coolest DARPA Projects]

A video released by DARPA shows how the system uses real-time optical guidance to steer the ammunition to a moving or accelerating target, regardless of weather and other forms of interference.

In the video, an expert shooter fires at a moving target, and the self-steering bullet corrects its course to hit the target. Then, an untrained person who has never used a sniper rifle before takes aim at the moving target and the bullet still finds its mark.

"True to DARPA’s mission, EXACTO has demonstrated what was once thought impossible: the continuous guidance of a small-caliber bullet to target," DARPA Program Manager Jerome Dunn said in a statement. "This live-fire demonstration from a standard rifle showed that EXACTO is able to hit moving and evading targets with extreme accuracy at sniper ranges unachievable with traditional rounds."

Dunn added that achieving the self-steering capabilities with a small, .50-caliber weapon was a "major breakthrough," which would make it possible to expand the system to all calibers.