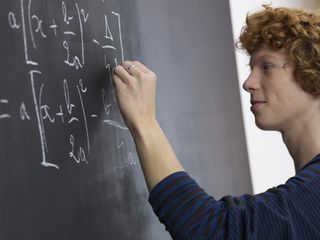 Algebra is a branch of mathematics dealing with symbols and the rules for manipulating those symbols. In elementary algebra, those symbols (today written as Latin and Greek letters) represent quantities without fixed values, known as variables. Just as sentences describe relationships between specific words, in algebra, equations describe relationships between variables. Take the following example:

It's a popular notion that such problems were invented to torment students, and this might not be far from the truth. This problem was almost certainly written to help students understand mathematics — but what's special about it is it's nearly 4,000 years old! According to Jacques Sesiano in "An Introduction to the History of Algebra" (AMS, 2009), this problem is based on a Babylonian clay tablet circa 1800 B.C. (VAT 8389, Museum of the Ancient Near East). Since these roots in ancient Mesopotamia, algebra has been central to many advances in science, technology, and civilization as a whole. The language of algebra has varied significantly across the history of all civilizations to inherit it (including our own). Today we write the problem like this:

Of course, the power of algebra isn't in coding statements about the physical world. Computer scientist and author Mark Jason Dominus writes on his blog, The Universe of Discourse: "In the first phase you translate the problem into algebra, and then in the second phase you manipulate the symbols, almost mechanically, until the answer pops out as if by magic." While these manipulation rules derive from mathematical principles, the novelty and non-sequitur nature of "turning the crank" or "plugging and chugging" has been noticed by many students and professionals alike.

Here, we will solve this problem using techniques as they are taught today. And as a disclaimer, the reader does not need to understand each specific step to grasp the importance of this overall technique. It is my intention that the historical significance and the fact that we are able to solve the problem without any guesswork will inspire inexperienced readers to learn about these steps in greater detail. Here is the first equation again:

We solve this equation for y by subtracting x from each side of the equation:

Now, we bring in the second equation:

Add the two fractions of x together and add 900 to each side of the equation:

Now, divide each side of the equation by 7/6:

Thus, the first field has an area of 1,200 square yards. This value may be substituted into the first equation to determine y:

Subtract 1,200 from each side of the equation to solve for y:

Thus, the second field has an area of 600 square yards.

Notice how often we employ the technique of doing an operation to each side of an equation. This practice is best understood as visualizing an equation as a scale with a known weight on one side and an unknown weight on the other. If we add or subtract the same amount of weight from each side, the scale remains balanced. Similarly, the scale remains balanced if we multiply or divide the weights equally.

While the technique of keeping equations balanced was almost certainly used by all civilizations to advance algebra, using it to solve this ancient Babylonian problem (as shown above) is anachronistic since this technique has only been central to algebra for the last 1,200 years.

Before the Middle Ages

Algebraic thinking underwent a substantial reform following the advancement by scholars of Islam's Golden Age. Until this point, the civilizations that inherited Babylonian mathematics practiced algebra in progressively elaborate "procedural methods." Sesiano further explains:  A "student needed to memorize a small number of [mathematical] identities, and the art of solving these problems then consisted in transforming each problem into a standard form and calculating the solution." (As an aside, scholars from ancient Greece and India did practice symbolic language to learn about number theory.)

An Indian mathematician and astronomer, Aryabhata (A.D. 476-550), wrote one of the earliest-known books on math and astronomy, called the "Aryabhatiya" by modern scholars. (Aryabhata did not title his work himself.) The work is "a small astronomical treatise written in 118 verses giving a summary of Hindu mathematics up to that time," according to the University of St. Andrews, Scotland.

Here is a sample of Aryabhata's writing, in Sanskrit. This is verse 2.24, "Quantities from their difference and product":

According to Kripa Shankar Shukla in "Aryabhatiya of Aryabhata" (Indian National Science Academy of New Delhi, 1976), this verse approximately translates to:

In modern algebraic notation, we write the difference and product like this:

While such procedures almost certainly originated in geometry, it is important to note the original texts from each civilization say absolutely nothing about how such procedures were determined, and no efforts were made to show proof of their correctness. Written records addressing these problems first appeared in the Middle Ages.

The Golden Age of Islam, a period from the mid-seventh century to the mid-13th century, saw the spread of Greek and Indian mathematics to the Muslim world. In A.D. 820, Al-Khwārizmī, a faculty member of the House of Wisdom of Baghdad, published "Al-jabr wa'l muqabalah," or "The Compendious Book on Calculation by Completion and Balancing." It is from "al-jabr" that we derive our word "algebra." Al-Khwārizmī also developed quick methods for multiplying and dividing numbers, which are known as algorithms — a corruption of his name. He also suggested that a little circle should be used in calculations if no number appeared in the tens place — thus inventing the zero.

For the first time since its inception, the practice of algebra shifted its focus away from applying procedural methods more toward means of proving and deriving such methods using geometry and the technique of doing operations to each side of an equation. According to Carl B. Boyer in "A History of Mathematics 3rd Ed." (2011, Wiley), Al-Khwārizmī found it "necessary that we should demonstrate geometrically the truth of the same problems which we have explained in numbers."

Medieval Muslim scholars wrote equations out as sentences in a tradition now known as rhetorical algebra. Over the next 800 years, algebra progressed over a spectrum of rhetorical and symbolic language known as syncopated algebra. The pan-Eurasian heritage of knowledge that included mathematics, astronomy and navigation found its way to Europe between the 11thand 13th centuries, primarily through the Iberian Peninsula, which was known to the Arabs as Al-Andalus. Particular points of transmission to Europe were the 1085 conquest of Toledo by Spanish Christians, the 1091 re-claiming of Sicily by the Normans (after the Islamic conquest in 965) and the Crusader battles in the Levant from 1096 to 1303. Additionally, a number of Christian scholars such as Constantine the African (1017-1087), Adelard of Bath (1080-1152) and Leonardo Fibonacci (1170-1250) traveled to Muslim lands to learn sciences.

Fully symbolic algebra — as demonstrated at the beginning of the article — wouldn't be recognizable until the Scientific Revolution. René Descartes (1596-1650) used algebra we would recognize today in his 1637 publication "La Géométrie," which pioneered the practice of graphing algebraic equations. According to Leonard Mlodinow in "Euclid’s Window" (Free Press, 2002), Descartes' "geometric methods were so crucial to his insights that he wrote that 'my entire physics is nothing other than geometry.'" Algebra, having departed from its procedural geometric partner 800 years earlier to develop into a symbolic language, had come full circle.