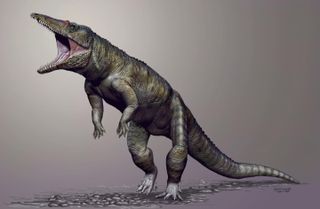 A life reconstruction of the giant crocodile ancestor (Carnufex carolinensis) that lived some 231 million years ago in what is now North Carolina.
(Image: © Copyright Jorge Gonzales. Open access)

A 9-foot-tall beast with bladelike teeth once stalked the warm and wet environs of what is now North Carolina some 230 million years ago, before dinosaurs came onto the scene there, scientists have found.

They named it Carnufex, meaning "butcher" in Latin, because of its long skull, which resembles a knife, and its bladelike teeth, which it likely used to slice flesh off the bones of prey, said lead study author Lindsay Zanno, of NC State University and the NC Museum of Natural Sciences. "'Butcher' seemed a very appropriate way to get that into the minds of people," Zanno told Live Science in an interview.

The large creature reveals not only one of the earliest crocodylomorphs, a group that includes today's crocodiles and their close relatives, but also highlights the diversity of top predators of the time. "People don't think about how many different predators were around in the Triassic, and that crocs really ruled before dinosaurs," Zanno said. [Photos: Ancient Crocodile Relatives Roamed the Amazon]

Zanno and her colleagues discovered parts of the skull, spine and arm bone of the creature while digging in the Pekin Formation in Chatham County, North Carolina. Sediments there were deposited 231 million years ago during what is called the late Triassic Period, when the area was still a part of the supercontinent Pangaea and was located near Earth's equator.

"Around the equator at that time, we don't yet have dinosaurs showing up in this ecosystem," Zanno said. That could be a sampling artifact or because scientists just haven't found those dinosaur bones, "but as far as we know they weren't there," she added. The absence of predatory dinosaurs may have allowed meat eaters like Carnufex to balloon to its giant size.

As soon as they saw the bones of the newfound creature in the rocks, the scientists knew it was something new. For instance, they noticed this weird texture on the animal's bones. "It has really pronounced ornamentation on the skull, it has all these pits and grooves," Zanno said, adding that the ornamentation is seen in crocs today but not in their early ancestors.

Being one of the earliest and most primitive crocodylomorphs, Carnufex shared characteristics with several groups of organisms, including cheekbone features and tooth shape that resemble those found in theropods, a group of meat-eating dinosaurs.

It also shared some skeletal features with the big-headed dinosaurlike reptiles called rauisuchids, a sister group of top predators on Pangaea at the time, Zanno said.

"Theropods were ready understudies for vacant top predator niches when large-bodied crocs and their relatives bowed out," Zanno said in a statement. "Predatory dinosaurs went on to fill these roles exclusively for the next 135 million years."

Crocodile ancestors would have been pushed into secondary predator roles, the researchers noted.

"As theropod dinosaurs started to make it big, the ancestors of modern crocs initially took on a role similar to foxes or jackals, with small, sleek bodies and long limbs," study co-author Susan Drymala, graduate student at NC State, said in the statement. "If you want to picture these animals, just think of a modern-day fox, but with alligator skin instead of fur."

The researchers detailed the discovery today (March 19) in the journal Scientific Reports.