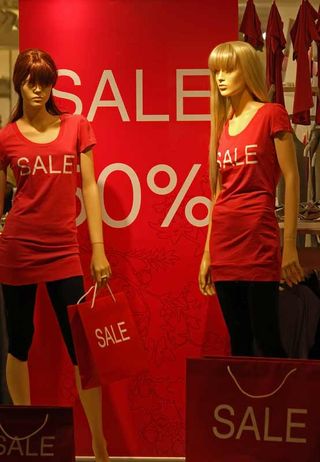 Can you calculate the total savings in this offer? 20 percent off the original price plus an additional 25 percent off the sale price. See story for details.
(Image: © Dreamstime)

Shoppers do crazy things. And retailers bank on it.

Several studies reveal how Americans shop in irrational ways, and increasingly scientists are figuring out how easily we can be duped. Retailers in turn use these tricks to get inside our heads, encouraging window shoppers to become real shoppers, driving purchases of sales items regardless of real value, and helping buyers feel good about the things they walk out with … often for no good reason.

One new study finds that happiness with a purchase depends on the choices that were available on a store shelf and how the items were presented.

After participants made choices, they rated the products and their satisfaction. In five tests that shifted the products and setups, the participants' preferences were affected by presentation. The bottom line: A product presented as clearly superior to other products on a store shelf makes for a happy customer, regardless of the product's inherent qualities to some degree.

The study is detailed in the August issue of the Journal of Consumer Research.

A study last year by a separate group, published in the same journal, reached a similar conclusion. Study participants were presented with two sofas. Sofa A was softer, but Sofa B was more durable. Sofa A was preferred by the minority — 42.3 percent of the participants. Then both sofas were presented with three other sofas that had very low softness ratings. Preference for sofa A jumped to 77.4 percent.

Tricks of the trade

There are many ways retailers encourage you to open your wallet. None is more obvious than putting things on sale.

Researchers have known empirically for more than 20 years a "50% off" sign leads consumers to assume a price is attractive, even if they have no knowledge of the original price or reasonable prices for that product.

In fact, shoppers as a whole seem quite clueless about sales values.

Studies have also shown that frequent but modest discounts — such as the constant sales at a car dealership — lead to perceptions of greater value than less frequent but deeper discounts.

Other tricks, such as this one documented in a study last year, are more subtle:

A salesperson can totally alter a window shopper's inclination to buy something by simply asking the right question. When a salesperson asks a shopper which of several items she prefers, the shopper tends to skip the whole "Should I buy it at all?" question and go straight to the "Which one should I buy?" phase. The study was done in simulated tests and in real-world retail situations.

“Stating a preference appears to induce a which-to-buy mindset, leading people to think about which of several products they would like to buy under the implicit assumption they have already decided to buy one of them,” wrote Alison Jing Xu and Robert S. Wyer, Jr. of the Hong Kong University of Science and Technology. “Consequently, they are more disposed to make a purchase than they otherwise would be.”

Amazingly, the gimmick worked even in selling unrelated products. Just 2 percent of a control group bought candy in one test. But in a group who had been asked to indicate their preference among mp3 players, restaurants, and mobile phones, 28 percent bought candy.

Some tricks are downright nasty. One sales technique is called “disrupt-then-reframe.”

Frank R. Kardes at the University of Cincinnati and colleagues found that by presenting a confusing sales pitch (such as telling a potential customer that a candy bar costs 300 cents) then restating the pitch in a more familiar way, they were able to increase sales of a candy bar in a supermarket. The same trick increased students’ willingness to accept a tuition increase or to pay to join a student interest group.

Any good salesperson knows that if you really want to sell something, you just need to know what the customer wants.

Another study by Simonson, the Stanford researcher, with Ran Kivetz of Columbia University, focused on loyalty programs, in which a consumer joins to gain discounts or some other rewards but is required to make a certain number of purchases.

The study "shows that people put too much emphasis on things that seem to fit them better than others, often leading to irrational choices," Simonson told LiveScience.