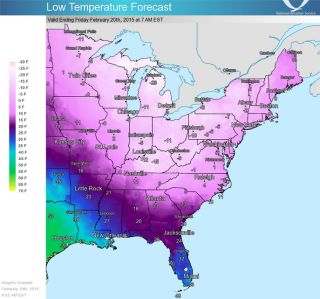 The Great Lakes and Ohio Valley will see temperatures below zero Fahrenheit by Friday (Feb. 20) and some parts of Florida will experience below-freezing weather.
(Image: © National Weather Service, Facebook screenshot)

As if the outdoors weren't harsh enough with Boston buried under ungodly amounts of snow and the rest of the Northeast unable to shake the bitter cold, more winter weather is on the way. So what's behind this extreme chill?

Parts of the United States are expected to have historic lows this week, as temperatures in the Southeast, Mid-Atlantic and central Appalachians may drop to the coldest they've been since the mid-1990s, according to the National Weather Service (NWS).

"Get ready for an even more impressive surge of Arctic air later this week as another cold front drops south from Canada," the NWS said in a statement. [Photos: The 8 Coldest Places on Earth]

That Arctic air in the form of a polar vortex eddy is dropping temperatures with a burst of bitterly cold air, the NWS said.

The freezing weather is part of a weather pattern that began last year, when the polar vortex, a system of cold air swirling around the Arctic, began pushing cold air into the United States. This pattern continued on and off throughout the summer, explaining the cooler temperatures in the eastern United States, said Bob Oravec, a forecaster at the National Weather Service.

This cold weather can take hold, thanks to flows in the middle and upper levels of the atmosphere that travel from northwest to southeast.

"They form at different times of the year, and they tend to go farther south during the winter," Oravec said. "Right now, we have that favorable weather pattern — a northwest flow from Alaska across a big part of Canada into the United States."

He called it one of the more persistently cold winters in the United States. "Especially this month, the temperature anomalies are way below average across a big part of the central to eastern United States," Oravec said.

Highs in the Southeast, Mid-Atlantic and central Appalachians will likely stay below 20 degrees Fahrenheit (minus 6 degrees Celsius) for much of today (Feb. 19) and Friday, and overnight lows may dip below 0 degrees F (minus 17 degrees C) in some places. A wind chill advisory is also in effect for these places, the NWS said.

Why Boston has record snow

A separate repeating weather system is to blame for the record snow levels in Boston and other parts of New England. [Weirdo Weather: 7 Rare Meteorological Events]

"Boston is now in the top two or three snowiest winters," said David Roth, a meteorologist at the National Weather Service's Weather Prediction Center in College Park, Maryland. "I'm pretty sure parts of Maine are getting there, too."

Similar weather conditions that support the polar vortex are pushing cold air toward New England. This winter, "they've been sweeping across or south of the Great Lakes, been coming off the East Coast and then strengthening as ocean storms," Roth said.

Southern New England falls right in its path, "so you end up having this big comma head of snow that ends up falling over the region," Roth said. "That's usually good for a foot [0.3 meters] or so of snow."

In warmer seasons, the same weather pattern would likely cause rain and thunderstorms.

The storm system will continue to repeat until another storm or weather system changes it, he added. For instance, coastal storms can drag weather systems north or northeast, he said.

Many New Englanders are looking forward to a break from the snow. They've had four significant snowstorms since Thanksgiving, amounting to 96.3 inches (245 centimeters) of snow accumulation at Logan Airport, according to the NWS. The average snowfall for this time of year is 30.2 in (77 cm). The average for large snowfalls in 2015, some of which last two days, is almost 20 inches, the NWS found.

But the days are getting longer as winter nears its end.

"No matter where you are in the eastern United States, the averages are coming up," Roth said. "The local sun angle is coming up each day. You're getting longer days."

It's unclear whether climate change is a factor behind the freezing weather, as it's difficult to link any individual weather event to climate change, said Matthew Rosencrans, a meteorologist with the National Weather Service.

Instead, researchers look at "the conglomeration of many of those events over time" to calculate climate change, Rosencrans said.

In fact, average global temperatures were above average for the month of January, and "they've been consistently above normal for the past eight to 10 years," he said.

In the future, climate change may lead to more extreme weather conditions, such as this frigid winter, he added.

"More extreme events do show up in some of the modeling studies under the warming planet scenario," Rosencrans said.