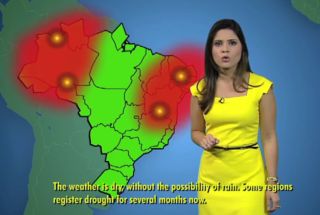 Brazilian presenter Claudia Celli predicts the forecast for her country in June 2050, based on findings from the Intergovernmental Panel on Climate Change.
(Image: © World Meteorological Organization | YouTube screen grab)

To illustrate global warming's possible effects on local weather, 13 nations from around the world created future weather reports in the lead-up to the UN Climate Summit yesterday (Sept. 23) in New York City.

In each weather report, meteorologists from countries including the United States, Brazil, Germany and Zambia put together short video forecasts for a day in 2050, predicting how a warming planet may lead to droughts, heavy storms and landslides the world over.

Though scientists are still not able to link global warming to any single weather event, models and other research have shown that as the world warms, different regions can expect more extreme weather, increased volcanic activity, ocean acidification and even rising pollen counts. Climate change is the "single biggest risk to the global economy today," said leaders at the 2014 Clinton Global Initiative in New York City this week. [8 Ways Global Warming Is Already Changing the World]

What's more, researchers are 95 percent sure that humans are causing global warming, which has been observed since the 1950s, according to a 2013 report from the Intergovernmental Panel on Climate Change (IPCC).

If the world's greenhouse-gas emissions continue to rise at the current rate, the average temperature of Earth's lower atmosphere could increase more than 7.2 degrees Fahrenheit (4 degrees Celsius) by the end of the 21st century, the United Nation's World Meteorological Organization (WMO) said in a statement.

How might warmer temperatures heat up daily life? The meteorologists, from Japan to Iceland, gave their best predictions based on data from the latest Intergovernmental Panel on Climate Change (IPCC) report.

Brazil submitted the first weather prediction. In June 2050, people may see heavy rainfall in southern Brazil and the west Amazon.

"In a few days, the rain will exceed the amount expected for the entire month, which increases the risk of flooding and landslides,” Brazilian presenter Claudia Celli said in the video. Northern Brazil and the East Amazon, in contrast, are trudging through another day of drought "with no possibility of rain," Celli said.

Researchers have already found possible links between climate change and extreme weather this year in Brazil, Celli said. "In late autumn, heavy storms reached southern Brazil. In Paraná state, 150 cities were in a state of emergency, three of them were declared public calamities," she said. "In three days, the amount of precipitation was three times above the historical average. Eleven people died, houses and bridges were swept away by the water and many people lost all they had. The cost was millions of dollars." [In Images: Extreme Weather Around the World]

The WMO released one video every day from Sept. 3 to Sept. 22. In Japan, Hiroko Ida predicted a heat wave and 6,500 weather-related deaths in 2050.

The United States foresaw hurricanes pummeling the East Coast, a heat wave disrupting Chicago and a megadrought lingering in the Southwest. Iceland expected warm temperatures and increased rain in lieu of snow. The weather shift may help forests grow, but the warm weather may also bring insects that attack native plants in the future.

Other countries that participated include Denmark, Burkina Faso, Bulgaria, South Africa and Tanzania.

"Climate change is affecting the weather everywhere. It makes it more extreme and disturbs established patterns. That means more disasters, more uncertainty," Ban Ki-moon, U.N. Secretary-General, said at the end of each video.

"We can reduce the risks by cutting global greenhouse gas emissions and building low-carbon economies," Ki-moon added. "Let's work together to make our societies safer and more resilient. Please join me in taking action on climate change."