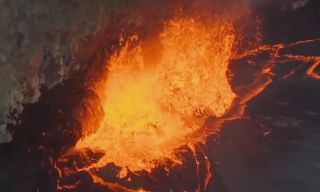 The rapid rise in sea levels could cause a dramatic increase in volcanic eruptions, according to a new study.

The study, published in the journal Geology, found that during periods of rapid climate change over the last million years, the rapid melting of continental glaciers and the resulting sea-level rise eventually increased volcanic eruptions as much as fold.

"Everybody knows that volcanoes have an impact on climate," said study co-author Marion Jegen, a geophysicist at Geomar in Germany. "What we found was just the opposite."

The findings were based only on natural changes in climate, so it's not clear whether human-caused climate change would have the same impact, Jegen said. And if it did, she added, the effect wouldn't be seen for centuries.

It's long been known that volcanism can dramatically alter the climate, often in cataclysmic ways. For instance, mass extinctions such as the one at the end of the Permian period may have been caused by continuous volcanic eruptions that cooled the climate and poisoned the atmosphere and the seas. [50 Amazing Volcano Facts]

But few people thought climate change could fuel volcanic eruptions before Jegen and her colleagues began looking at cores drilled from the oceans off of South and Central America. The sediments showed the last 1 million years of Earth's climatic history.

Every so often, shifts in Earth's orbit lead to rapid warming of the planet, massive melting of glaciers and a quick rise in sea levels. The team found that much more tephra, or layers of volcanic ash, appeared in the sediment cores after those periods. Some places, such as Costa Rica, saw five to 10 times as much volcanic activity during periods of glacial melting as at other times, Jegen told LiveScience.

To understand why that would be, the research team used a computer model and captured how those changes affected the pressures experienced at different places on the Earth's crust. The team found that when glaciers melt, they reduce the pressure on continents, while sea-level rise increases pressures on the ocean floor crust. In the computer model, the change in pressures on the Earth's crust seem to cause increases in volcanism.

In general, the speed of the transition from ice age to melting, rather than the total amount of melting, predicted how intensely the volcanic eruptions increased, she said.

The study doesn't address whether modern-day climate change would have any impact on the frequency of volcanic eruptions, though in theory it's possible, Jegen said.

But even if anthropogenic, or human-caused, climate change impacts volcanic eruptions, people wouldn't see the effect in this lifetime, because the volcanic activity doesn't occur immediately after the climate change, Jegen said.

"We predict there's a time lag of about 2,500 years," Jegen said. "So even if we change the climate, you wouldn't really expect anything to happen in the next few thousand years."