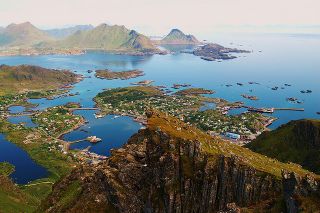 Using traces of human feces in lake sediments, scientists have recreated the history of a settlement in the Lofoten Islands, Norway, an archipelago north of the Arctic Circle
(Image: © Eaglestein | Flickr.com)

Human waste can map two millennia of history and climate change in a remote, Arctic settlement in Norway, according to a new study.

The findings suggest that human waste deposits could help researchers untangle the effects of natural and human-caused climate changes.

"We're able to really effectively disentangle what's human and what's natural," said study co-author Robert D'Anjou, a researcher at the University of Massachusetts. "We're able to date the onset of human settlement in the area and also look at agricultural practices and settlement history alongside the changing environment."

The report was published today (Nov. 26) in the journal Proceedings of the National Academy of Sciences.

Poop through the years

Archaeologists have used traces of ancient feces to recreate the history of specific archaeological sites: For instance, determining whether a latrine was ever used, D'Anjou told LiveScience. But nobody had used human waste to track the arc of human settlement and its effect on the environment. [Through the Years: A Gallery of the World's Toilets]

To do so, D'Anjou's team drilled several sediment cores from the bottom of the frigid Lake Liland on Vestvågøya Island, part of an archipelago of Norwegian islands north of the Arctic Circle. Since the Iron Age, people have farmed around this lake, and one of the largest Viking longhouses of the Arctic sits by the lake's frigid waters.

The team analyzed coprostanol, a chemical component of human waste, as well as chemicals found in the waste of cows, sheep and other livestock. To tie human population levels to climatic changes, they also measured polycyclic aromatic hydrocarbons (PAH), a fingerprint of burning vegetation.

Levels of human and livestock waste byproducts jumped sharply around 2,300 years ago, when people first settled by the lake. At the same time, levels of PAH rose, probably because the new settlers burned forests to make way for grazing land and farming, D'Anjou said.

But from A.D. 650 to 850, human poop output dropped and the grassland gradually became reforested — possibly because settlers left the shores of Lake Liland for the newly discovered territory of Iceland.

Another drop in human waste corresponded to the plague's peak during the late 1300s, when about 80 percent of the population moved from these areas or died off, D'Anjou said.

During the Little Ice Age, which lasted from the 1500s to the 1800s, PAH levels increased while the amount of coprostanol remained constant, indicating the settlers were probably burning much more wood to stay warm.

"In the Arctic, it's going to be very cold, so we see an increase in burning wood to keep warm," D'Anjou said.

The new study reveals how the climate and agriculture were intertwined, D'Anjou said.

"Slight variation in the growing season for agriculture greatly influenced the settlement and the population alongside this lake," D'Anjou said.

When the weather turned too cold for farming, settlers may have abandoned their farms for the coasts, where they fished for cod, he added.

But it also reveals a new way to piece together the history of the recent past, he said. Many times, researchers look only for specific compounds in sediments, but that limits their ability to recreate history, D'Anjou said.

"They have blinders on to what could be a really cool story in the strangest of locations," he said. "This one happened to come from poop."