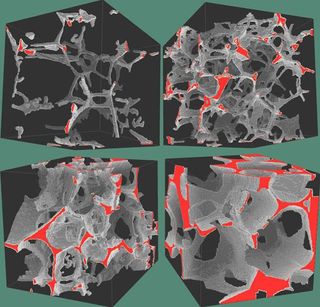 Details into how most of the crust that covers the planet formed are now emerging from new 3-D X-ray images of melted rock.

More than 60 percent of the Earth's surface formed at volcanoes on deep-sea ridges in the middle of oceans where tectonic plates are spreading apart. However, investigations of how magma seeps from these mid-ocean ridges where new crust is created have been limited to indirect seismic images of the ocean crust or two-dimensional images of melted rocks. The images either lacked fine detail as to what the rock was doing or potentially failed to capture the complexity of how it was structured in three dimensions.

Now scientists have analyzed rocks frozen in various stages of melting in 3-D using a technique known as X-ray synchrotron microtomography. This method allowed the researchers to image how this rock behaved down to a resolution of 700 nanometers, or roughly a wavelength of deep red light. As such, the scientists could explore what occurred using benchtop experiments and scale the results up to what happens at mid-ocean ridges.

In the lab, the scientists used rocks chemically similar to the so-called peridotites from the mantle layer beneath the crust. These were partially melted at temperatures of 2,460 degrees Fahrenheit (1,350 degrees Celsius) and high pressures of more than 217,000 pounds per square inch, to mimic the conditions below the seafloor crust, before they were returned to room temperature and pressures.

The investigators found these rocks formed porous networks on the scale of single mineral grains. Their findings suggest that interconnected networks of partially molten rock allow buoyant magma to rise up to the seafloor, leading new oceanic crust to form at mid-ocean ridges.

In the future, the researchers hope to image the rocks while they are heated and kept under pressure.

"If we can develop such a technique, then we will be able to visualize the formation process of mantle peridotites at mid-ocean ridges," researcher Wenlu Zhu, a geophysicist at the University of Maryland, College Park, told OurAmazingPlanet. "This one is dubbed 'four-dimensional' imaging — that is, three dimensions in space plus one dimension in time."

The scientists detailed their findings in the April 1 issue of the journal Science.