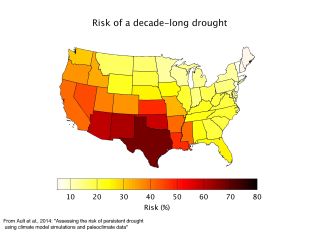 The Southwest faces a dry and dusty forecast, with a 90 percent chance of a decade-long drought searing southern regions of Arizona and New Mexico this century, if global greenhouse gas emissions stay the same.

The drought risk for southern portions of California and Nevada is nearly as great, with an 80 percent chance of a decade-long drought by 2100. California is already in the midst of an extreme drought. In 2014, the water shortage is expected to cost the state a total of $2.2 billion, including agricultural losses, according to a recent study from the University of California, Davis.

The U.S. Southwest has always suffered droughts. Tree rings and other historical records show one or two of these 10-year dry spells strike every century, such as in the 1950s. But computer models predict that climate change will tweak this historical drought pattern. Thanks to global warming, the Southwest is transitioning to a hotter and drier local climate, with less rain and snow, studies show. [The Worst Droughts in US History]

"A drier Southwest is also a Southwest at risk of a megadrought," said Toby Ault, a climate scientist at Cornell University in Ithaca, New York, and lead author of the new study, published Aug. 28 in the Journal of Climate Science.

In the new study, Ault and researchers from the University of Arizona and the U.S. Geological Survey calculated the odds of future long-term droughts in the Southwest, accounting for the drying from global warming. They estimated the risk of consecutive dry years using climate models combined with historical drought records, such as tree rings and river flows.

Not only did the researchers find a high probability of a prolonged Southwest drought, they also discovered an increased risk of megadroughts, which parch the region for decades. The odds of a 35-year megadrought this century were between 20 and 50 percent, depending on whether or not emissions fall or continue at current levels.

A 35-year megadrought could sap the Colorado River of the water needed for the eight states and two countries that depend on its copper-colored flow.

The Southwest's drying climate will also boost the chances of an extraordinary 50-year megadrought from one or two per 1,000 years to between 5 and 10 percent this century, the study found.

The risks could be worse because the region's rising temperatures may add to drought conditions by increasing evaporation, the researchers said. The study only accounts for declining rain and snow

Ault said that knowing the future risks could help people prepare for the threats from megadroughts.

"I view a megadrought as another type of natural hazard, but it's a hazard that moves in slow motion," Ault said. "It unfolds over decades. Like many other hazards we face, we can adapt to it, prepare for it and plan for it."