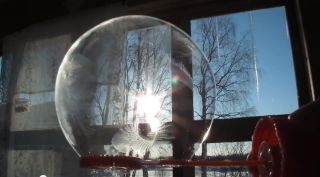 The cold is so delightful, well, it can be. In fact, plenty of wacky phenomena, from frost quakes and frozen soap bubbles to square tires and soda slushies, are possible, or practical, only when temperatures dip below freezing.

So as you stay toasty indoors, free of frostbite, check out these 7 "cool" effects of sub-zero temperatures. [Photos: The 8 Coldest Places on Earth]

Alcohol and soda will transform to a slushy almost magically in the extreme cold.

The trick is simple: Just take a soda or an alcoholic beverage out in the snow in a sealed bottle and let it cool for a few hours, then open it up and watch the slush form.

Normally, pure water freezes at 32 degrees Fahrenheit (0 degrees Celsius). But the added ingredients in soda or alcohol lower the freezing point, making the beverage liquid at supercool temperatures. Opening the soda bottle lowers the pressure inside and releases tiny bubbles of carbon dioxide that serve as the seeds for tiny ice crystals, forming a frosty and delicious slush. The technique also works with alcohol or mixed drinks, because opening the bottle is still usually enough to seed the tiny ice crystal formation.

Be careful not to make the beverage too boozy, though. Pure alcohol freezes at a frigid minus 173 degrees Fahrenheit (minus 114 degrees Celsius), so the stronger the alcohol, the colder it will need to be outside for the trick to work.

Glass and aluminum tend to work better than plastic bottles, and anecdotal reports suggest that diet sodas, which don't have any sugar content, can sometimes yield less-than-stellar results.

Playing around with boiling water in cold, windy conditions may not be the smartest way to spend the day. That said, the result could be spectacular if you are very careful and there is a large enough of a temperature difference between the air and water, with best results occurring once air temperatures dip to minus 30 F (minus 34 C) or below, one expert says.

Here's how boiling water "magically" turns to snow: Cold air is very dense, meaning its molecules are scrunched close together, leaving little room for water vapor molecules. When boiling water is thrown into that chilly, dry air, there's no place for those water droplets to go.

"So the vapor precipitates out by clinging to microscopic particles in the air, such as sodium or calcium, and forming crystals," Mark Seeley, a climatologist at the University of Minnesota, told LiveScience's Life's Little Mysteries in 2011. "This is just what goes into the formation of snowflakes." [Photos of Snowflakes: No Two Alike, of Course]

3. Get out your square tires

Residents of Alaska, Montana and other northern climes know they need a plugged-in block heater under the hood to keep their car warm enough to start on below-zero mornings. But there's another quirk of driving in super-cold weather: square tires.

In cold weather, the chilly air inside car tires contracts, decreasing air pressure.  Mechanics use the rule of thumb that for every drop of 10 degrees Fahrenheit, tires lose 1 pound per square inch (PSI) of pressure. This pressure loss causes tires to flatten slightly, leaving the side sitting on the asphalt looking like a pancake.

Tires typically warm up when the car starts moving, but when the mercury hits about minus 30 F (minus 34 C), that doesn't happen very quickly. The result is a bumpy ride as the car runs on not-quite-round wheels.

Of course, you don't have to live near the Arctic Circle to have temperature-related pressure problems. Mechanics recommend everyone double-check tire pressure in the winter to make sure tires aren't underinflated due to cold weather.

Frost quakes typically strike after a cold snap rapidly drops temperatures well below freezing. The quick freeze makes ice in the ground swiftly expand and crack, producing loud booms. Though frost quakes sometimes shake the ground, their effects are localized, so the tremors are rarely caught on earthquake monitors. A similar phenomenon called ice quakes can loudly crack the ice in lakes and rivers.

Both frost quakes and ice quakes are known as cryoseisms. A few crysoseisms hit every winter in Canada. They've also been reported in the Northeast, Midwest and Alaska. [Weirdo Weather: 7 Rare Weather Events]

Wood frogs — native to northern regions of North America, from North Carolina up to Arctic Canada and Alaska — freeze almost completely solid during the coldest months of winter: As cold-blooded animals, their body temperatures can't resist changes in ambient temperatures. But the hoppers have evolved a mechanism to survive their frozen stupor, in which their liver breaks down a compound called glycogen into glucose (sugar), and releases that glucose into their bloodstream. The sugar behaves as a sort of anti-freeze in the animal's blood, keeping it alive as it hibernates through the coldest months of the year.

The frogs can live this way for weeks at a time, until temperatures rise back up above freezing. At this point, their hearts start to beat; they gulp for air, jiggle their legs, and hop away in search of a mate.

Bubbles can make any scene seem like a fairy tale, but they pop in the blink of an eye. That's not an issue when temperatures dip below about 9 to 12 F (about minus 11 C), and you can make the bubbles freeze. The trick is to blow them up in the air so that they have time to freeze before hitting the ground or another surface. The bubbles will form crystalline patterns and some might break, looking a bit like the shell of a cracked egg.

Good thing this one happens only when it's super-duper cold. This winter, Maddie Gilmartin, 12, of East Kingston, N.H., tested out the "what happens if you stick your tongue to a frozen metal flagpole." Sure enough, her tongue stuck to the pole, as the New York Daily News notes. Her parents tried to blow warm air on her tongue and douse it with warm water to get it unstuck, but to no avail. Eventually the paramedics freed her, and her tongue, whose swelling could take up to six months to go down.

Why does this happen? The tongue is warm, and when it touches the frigid pole, the pole saps that warmth and cools the tongue, causing the body to send more heat to the cooled area. But the high thermal conductivity of the metal pole means it sucks up that warmth faster than the body can resupply it to the tongue. The upshot: The moisture on the tongue freezes in the pores of the tongue and the metal and, voila, you're stuck.

Editor's Note: This article was updated to include a note about being "very careful" if you try the boiling water experiment.