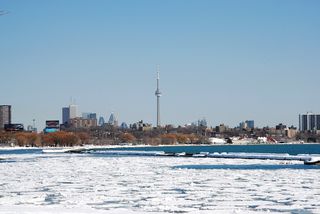 Frost quakes typically strike after a rapid temperature drop, such as the big chill that hit Ontario when the polar vortex swept through on last week. The quick freeze makes ice in the ground swiftly expand and crack, producing thunder-like booms. These "frost quakes" were reported throughout Ontario, with the first complaints of cracks and booms starting on Twitter around 5 p.m. ET on Jan. 2 and peaking about 2 a.m. ET Friday, Jan. 3.

Though frost quakes can shake the ground, their effects are so localized that the tremors are rarely caught on earthquake monitors. Natural Resources Canada did not record any shaking on its seismometer network, said Allison Bent, a seismologist with Earthquakes Canada in Ontario.

"With frost quakes, almost all the energy is on the surface, so if you're close to it you feel it quite strongly, but not enough energy gets into the ground to pick it up far away," Bent told LiveScience's OurAmazingPlanet.

To confuse the matter, there are also ice quakes, a similar phenomenon that loudly cracks ice in lakes and rivers. A seismometer at the University of Wisconsin-Madison, caught shaking from a booming ice quake on nearby Lake Mendota on Jan. 31, 2008. The ice quake was equivalent to an earthquake magnitude of minus 0.2.

A few frost quakes hit every winter in Canada, Bent said. They've also been reported in the U.S. Northeast, Midwest and Alaska.