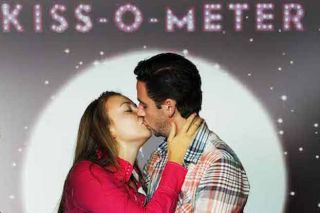 Choosing the best mate this Valentine's Day just got sort of creepy: Accumulating research suggests that in addition to good looks, charm and intelligence, a person's body bugs may also play a role in love.

The human body is home to 100 trillion microbes, known collectively as the microbiome. In fact, bacterial cells in the human body outnumber human cells by a ratio of 10 to 1. In recent years, scientists have found that these communities of organisms are crucial for human metabolism and immune system function.

"So it shouldn't be surprising that [the microbiome] has effects not only on metabolic processes, but on the way we look at things ... and even in sexual attraction," said Dr. William Miller, a retired physician, evolutionary biologist and author of the book "The Microcosm Within: Evolution and Extinction in the Hologenome" (Universal Publishers, 2013). [Body Bugs: 5 Surprising Facts About Your Microbiome]

Scientists are starting to discover just how big a role these tiny tenants play in human lives. For example, microbes may be invisible musicians in the complex orchestra of human attraction. "We are being supplied by a number of hidden cues we just didn't realize were there," Miller said.

In November 2014, Dutch scientists published a study in the journal Microbiome that found that couples have similar microbial communities in their mouths, and a 10-second kiss can transfer up to millions of bacteria.

In that study, researchers gave 21 couples at the Artis Royal Zoo in Amsterdam (including two gay couples)questionnaires about their kissing habits, including how often they kissed in the past year and how much time had passed since their last intimate kiss. Then the researchers swabbed the couples' mouths to determine the bacterial makeup on their tongues before and after a kiss.

The more often the couples kissed, the more alike their oral microbial communities were, the researchers found. In addition, the couples' tongue bacteria were more alike than those in their saliva.

In the same study, the researchers asked one member of each couple to drink a probiotic yogurt containing the "marker" bacteria Lactobacillus and Bifidobacteria, before engaging in a 10-second kiss with their partner. When the scientists sampled the mouth bacteria of the person who didn't drink the yogurt, the amount of these marker microbes had tripled, amounting to about 80 million new bacteria.

But there's more to the story. The bacteria on the top of the couples' tongues were more similar to each other than to those of strangers, but this similarity did not correlate with the frequency of kissing. Instead, the couples probably share similar microbes because they have similar lifestyles, living environments or genetics, the researchers said.

Bacterial inhabitants aren't the only unseen forces at play in human attraction. Other studies have found that people are more attracted to others with immune systems different from (and complementary to) their own.

In a 1995 study in the Proceedings of the Royal Society B, Swiss researchers had male students wear the same T-shirt for two consecutive days, without deodorant, and then asked female students to smell and rate the odors of the shirts without knowing which men had worn them. The women favored the shirts from men whose immune systems were most different from their own, the researchers found. This makes sense from an evolutionary standpoint, because choosing a mate with a different immune system would have made the couple's offspring more likely to survive infections, Miller said.

Given how much scientists are learning about the hidden forces that govern sexual attraction, could humans' microbial composition and immune system type someday make it onto dating profiles?

"When you think about this deeply, the answer is, 'Why not?'" Miller said.