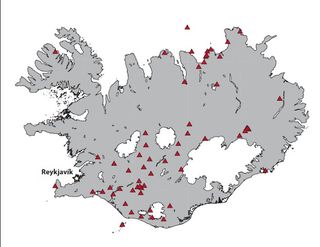 Iceland’s glaciers (white) are melting faster and faster. As a result, the Icelandic crust near the glaciers is rebounding at an accelerated rate.
(Image: © Kathleen Compton/University of Arizona Department of Geosciences)

The speed of this rise is among the fastest rates at which the crust of the planet is rising, "and may continue to get faster every year," lead study author Kathleen Compton, a geoscientist at the University of Arizona in Tucson, told Live Science.

Geologists have long known that as glaciers melt and become lighter, the surface of the Earth rebounds upward as the weight of the ice decreases. However, whether the current rebound is due to past or modern ice loss is an open question. [Ice World: Gallery of Awe-Inspiring Glaciers]

To determine how fast the crust is moving in Iceland, the researchers used a network of 62 GPS receivers fastened to rocks throughout the island, some of which have been operating since 1995. By tracking the position of the GPS receivers, the scientists can monitor the movements of the rocks and calculate the speed at which they are moving.

The scientists primarily used this network of GPS receivers to track geological activity, such as earthquakes and volcanic eruptions. In 2013, study co-author Richard Bennett, a geoscientist at the University of Arizona, noticed that one of the long-running stations in the central highlands of Iceland was showing a site that was rebounding at a surprisingly accelerated rate. He and his colleagues then discovered that a number of nearby stations were also experiencing this mysterious level of uplift.

"We wondered, 'what in the world could be causing this?" Bennett said.

To figure out the answer to this mystery, the research team began systematically analyzing years of signals from the network of GPS receivers. They found the fastest uplift occurred in the regions between Iceland's largest ice caps, moving as much as 1.4 inches (3.5 centimeters) per year. The rate of uplift slowed the farther the receiver was from these frozen regions.

"I was surprised by the high rates of uplift, and particularly by the fact that these rates have been increasing through time," Bennett told Live Science.

The researchers suspect accelerated ice loss may be the culprit behind this accelerated uplift. Temperature records for Iceland, some of which go back to the 19th century, show temperatures increasing there since 1980. Prior studies estimated that since 1995, Iceland has been losing about 9.5 billion tons of ice each year, Compton said.

Past research found that the rebound from the end of what is often known as the ice age concluded about 9,000 years ago. This suggests the recent rebound seen in Iceland is due to modern climate change. [6 Unexpected Effects of Climate Change]

Iceland gains ice in the winter and loses ice in the summer. However, computational models suggest that Iceland's glaciers have to be melting faster and faster every year to explain the acceleration in uplift seen on the island. The onset of rising temperatures and the loss of ice corresponded closely with Compton's estimates of when this accelerated uplift began.

"We have shown that accelerating uplift is caused by accelerated melting of Iceland's ice caps," Compton said.

"What we're observing is a climatically induced change in the Earth's surface," Bennett added.

Bennett said there is geological evidence that when the ice age ended about 12,000 years ago, volcanic activity in some regions of Iceland increased thirtyfold. Other scientists have estimated that the Icelandic crust's rebound from global- warming-caused ice loss could increase the frequency of volcanic activity to as much as one eruption the size of Eyjafjallajökull every seven years, referring to the 2010 eruption that disrupted flights across Europe.

"Further research would be required to understand if accelerated ice loss has implications for volcanic activity beyond what other researchers have reported previously," Bennett said.

The researchers next plan to analyze the uplift data in Iceland to find if there are any seasonal variations as the ice caps grow during the winter and melt during the summer.

"By studying the response of Earth to ice loss over time, we hope to learn something about the dynamics of the solid Earth, and volcanic systems in Iceland," Bennett said. "Continued monitoring of the Earth's surface is required to see if [the] rebound will continue at ever-accelerating rates, if the rate of rebound will plateau, or perhaps even decelerate in coming years."