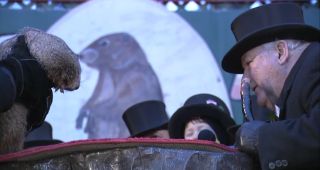 Every February, a small, furry mammal with buck teeth gets trotted out in front of a crowd in Pennsylvania to take part in a time-honored Groundhog Day tradition: If the beloved groundhog Punxsutawney Phil "sees" his shadow, the country is in for six more weeks of winter; if he doesn't, we're in for an early spring.

The prognosticating woodchuck saw his shadow today (Feb. 2). (Though it was blistering cold this morning in Punxsutawney, with snowflakes blowing, Phil somehow eked out a shadow.) Last year, the pudgy groundhog did not see his shadow, suggesting an early spring.

A team of wonks at The Washington Post actually did the math. They calculated the average daily temperatures during the six weeks after Groundhog Day for the past 30 years, comparing the temperatures in the years when Phil saw his shadow to those in the years he did not.

"Even though Phil's predictions proved correct for some areas of the country, the difference in average temperatures between years he predicted an early spring (times he did not see his shadow) and years he did not (times he saw his shadow) varied by no more than a few degrees," the Post reported.

In the Post's analysis, weather records suggest that Phil was right more often than not in some cities, but the results basically come down to chance. Temperatures do not vary uniformly across the country, so Phil's predictions are bound to be right somewhere.

One exception was Oklahoma City, where years in which Phil saw his shadow were 8.5 degrees Fahrenheit (4.7 degrees Celsius) cooler than years when he didn't see it, the Post analysis found.

But in many places, the revered rodent's predictions were way off. For example, in St. Petersburg, Florida, years when Phil saw his shadow were on average 13.9 F (7.7 C) warmer than nonshadow years, according to the Post.

The many groundhogs that have been designated as Phil over the years have predicted 99 forecasts of more winter and 15 early springs, according to the Punxsutawney Groundhog Club, of Punxsutawney, Pennsylvania, which takes care of the animals. (Nine of the years are missing records.) According to data from the Stormfax Almanac, Phil's predictions have been correct only 39 percent of the time in his hometown of Punxsutawney.

A number of other parts of the country have their own weather-forecasting rodents. New York has Staten Island Chuck, a groundhog that lives at the Staten Island Zoo. This year, Chuck's prediction disagreed with Phil's — the New York native instead called for an early spring.