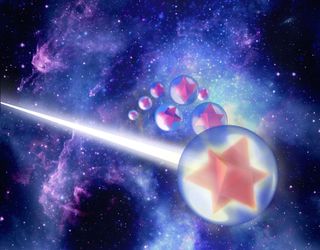 Finding cancer cells might one day involve shining a laser onto a certain region of the body, and watching the cancerous cells light up.

Researchers have developed a new type of nanoparticle that they call "nanostars," which accumulate in tumor cells and scatter light, making the tumors easy to see with a special camera.

The particles are each about 140 nanometers (0.000005 inches) across, and consist of eight-point gold stars that are surrounded by a layer of dye and encased in a sphere of silica and a polymer. The researchers' method of making the stars ensures that all of the particles are nearly identical, which is important because earlier efforts to make such nanoparticles weren't able to produce the consistent shapes needed, said Dr. Moritz Kircher, a molecular imaging specialist at Memorial Sloan Kettering Cancer Center in New York City.

That regular star shape is important because it scatters light in a particular way, Kircher said. When a laser hits one of the nanostars, most of the light scatters with the same amount of energy. But a small number of photons – about 1 in 10 million -- scatter with less energy, because they give up some to the chemical bonds in the dye that coats the gold stars, changing the way the dye looks under the laser light. [10 Technologies That Will Transform Your Life]

Ordinarily, it would be difficult to see the change in the light, but the gold amplifies it enough so that cameras can see it, Kircher told Live Science. The nanoparticles can't enter noncancerous cells in the body, so only the cancer cells light up.

To test their invention, the researchers looked at mice that were genetically engineered so that they were very likely to develop cancer, and injected them with the nanostars.

"In normal organ, muscle or fat [cells], they don't leave the bloodstream," he said. Cancerous cells have larger pores in the blood vessels that nourish them, allowing the nanoparticles through.

The nanostars could be important in treating people with cancers in which the dangerous cells are sometimes hard to see, such as liposarcoma, a cancer that arises in fat cells. "You go in, and open up the abdomen, say, and see all that fat," Kircher said. "You see some streaks that look abnormal, but don't know where [edges] of the tumor are. So doctors either have to take out all of the tissue that might possibly contain cancer, or risk leaving some cancerous cells in the body."

These new nanoparticles would show where the dangerous cells are, and make the surgery a lot more precise, he said.

There are other benefits over earlier efforts, Kircher said. The nanostars are non-specific — they don't need to be custom-made for each type of cancer. Earlier experiments with nanoparticles often required them to be built to order, coated with proteins that would link to specific types of cancer cells.

But before these nanoparticles get to the clinic there is still work to be done testing their toxicity, which will require animal studies, he said.

"This is really good work concerning nanotechnology and it's application," said Andrey Kuzmin, professor of physics at the Institute for Lasers, Photonics and Biophotonics at the State University of New York at Buffalo, who was not involved in the research. Kuzmin's team has also done extensive work on nanoparticles. He added that the use of the star shape was new, as most previous gold nanoparticles were more like rods.