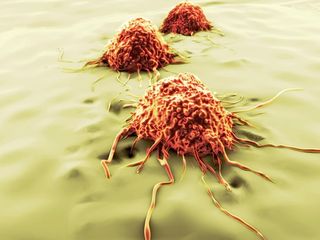 Exactly what triggers cancer cells to spread throughout the body remains a mystery.
(Image: © Artist depiction of cancer cell migration via Shutterstock)

One of the great mysteries of cancer is how it spreads, or metastasizes, throughout the body. But researchers have made an important discovery that may help to solve that puzzle: Cancer cells may fuse with white blood cells in order to spread.

Researchers at Yale University have discovered a metastasis in the brain of a cancer patient that likely grew from the hybrid of a cancer cell and a white blood cell.

The researchers investigated a brain metastasis in a 68-year-old cancer patient who had been treated with a bone marrow transplant from his brother. Bone marrow produces the body's macrophages, a type of white blood cell, and the macrophages from donated bone marrow are genetically distinct from the bone marrow of the person who receives them.

It turned out that the brain metastasis contained genes from both the patient and his brother.

"This tumor was clearly a donor-patient hybrid," said John Pawelek, a cancer biologist at the Yale School of Medicine. "That's really exciting — that's the first proof of cell fusion in human cancer." Pawelek and his colleagues detailed their findings June 26 in the journal PLOS ONE.

These findings could lead to new targets for drugs that could attack such hybrids to prevent the spread of cancers, scientists said.

Most people who succumb to cancer die when it metastasizes — tumors are typically more treatable before they spread. In metastasis, cells somehow acquire the means to break away from their original (primary) tumor, migrate past other cells, travel around the body via blood or lymph vessels, invade tissues and grow in the uncontrolled manner typical of cancers. [Top 10 Cancer-Fighting Foods]

An alternative explanation, proposed more than a century ago by German pathologist Otto Aichel, suggests that cancer cells become metastatic after fusing with macrophages. For evidence of this explanation, Pawelek noted that like metastatic cells, macrophages can infiltrate past their neighboring cells and roam the body. In addition, macrophages regularly engulf germs and unhealthy cells. This engulfment includes fusing with unhealthy cells — which suggests some macrophages could fuse with tumor cells instead of destroying them, forming cancer cells that have macrophage traits.

Past research had shown that tumor cells implanted into lab animals could spontaneously fuse with the animal's own cells, and become metastatic. However, attention waned in the fusion theory because scientists could not find a way to detect any such hybrids in human cancer patients — a person's tumor cells and their macrophages would be virtually genetically identical, making it difficult to prove that metastatic cells were hybrids.

If cell fusion turns out to be a major cause of metastasis, "responsible for, who knows, 10 percent to 100 percent of metastases, then these hybrids would be great targets for therapies," Pawelek told LiveScience. "If we could stop metastases by targeting these hybrids, that could help save lives."

Gary Clawson, a pathologist and cancer biologist at Pennsylvania State University, said that while the new results are exciting, they do not conclusively prove that cell fusion leads to metastasis.

Although the cancer in the patient's brain definitely contained hybrid cells, no primary tumor was seen elsewhere, he said. This raises the possibility that this cancer may not have arisen metastatically, arriving from elsewhere in the body. Instead, this cancer may have been a primary tumor that arose from fusions between macrophages and cells in the brain.

Pawelek explained that samples from the rest of the patient's body were not available to the researchers because they had never been surgically removed in the first place, or because the specimens had been reserved for diagnosis by physicians. As such, the researchers had no way to analyze tumors elsewhere in the patient.

Clawson said hybrid cells may play a different role in metastasis: They might alter tumor cells, helping them acquire the ability to migrate, he said.

Clawson also suggested that hybrids may travel around the body and release cancer-triggering molecules, creating sites where metastases could flourish. Metastases could then form when cancer stem cells — cells in tumors thought to have the capability to produce new growths — leave tumors, circulate around the body and colonize the sites that hybrid cells already made vulnerable to cancer. Clawson detailed this idea in the Nov. 8 issue of the journal Science.

However, Pawelek said he finds this explanation unnecessarily complicated. "I think hybrid cells by themselves can circulate, and cause tumors at other sites," he said.