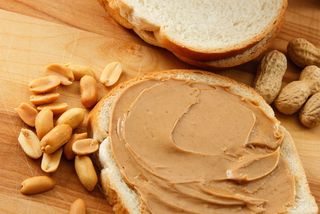 A 10-year-old boy got a surprise bonus after being treated for leukemia: The very same procedure that cured his cancer also may have cured his severe peanut allergy.

The boy remains cancer-free, and peanut-allergy free, following a bone marrow transplant to treat his acute lymphoblastic leukemia, said the doctors who presented his case today (Nov. 8) at the annual meeting of the American College of Allergy, Asthma and Immunology (ACAAI) in Baltimore.

This two-for-one cure is not unprecedented, but is rare and provides new insights into the nature of allergies and the workings of the immune system.

Food allergies are an increasing public health concern in the United States, with approximately 5 percent of school-age children affected, according to the National Institutes of Health. Public awareness of peanut allergies is especially high; many U.S. grade schools have nut-free policies.

Unlike allergies to foods such as soy and milk, which some kids outgrow, peanut allergies sometimes last a lifetime.

"Our research found a rare case in which a transplant seems to have cured the recipient of their allergy," said lead study author Dr. Yong Luo, an allergist affiliated with Novartis Pharmaceuticals.

Bone marrow transplants carry a number of risks — infection is a big concern, and some people experience anemia, bleeding and diarrhea. Given these risks, along with the expense of the procedure, no doctors are recommending transplants to treat allergies.

But scientists say these rare cases of allergies being cured might provide important clues as to how these severe allergies arise in children, and could lead to improved therapeutic options.

"This case…indicates that genetic modification during the early stages of immune-cell development in bone marrow may play a large role in causing allergy," said Dr. Steven Weiss, an allergist in Syosset, N.Y., and co-author of the study.

Food allergies are caused by an exaggerated immune response to proteins called antigens. The immune cells responsible for this response originate from stem cells found in bone marrow.

When a transplant is performed, a patient's unhealthy bone marrow cells are eradicated and replaced with cells from a healthy donor. If the cells that produce hypersensitive immune reactions are also replaced, then it is possible that an allergy can be cured.

Children with a peanut allergy should always carry prescribed epinephrine, and proper testing should be done by a board-certified allergist to determine if the child is sensitive to any other particular allergens, according to the ACAAI.

Reactions to food allergens can vary greatly, ranging from mild rash and tingling lips to life-threatening systemic anaphylaxis, a severe allergic reaction that can lead to difficulty breathing, loss of consciousness and shock. Strict avoidance of food allergens is the most strongly recommended course of management for affected individuals.