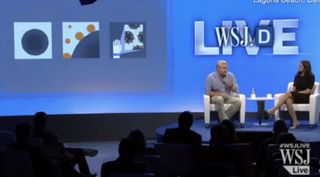 At a technology conference hosted by the Wall Street Journal, Andrew Conrad, of the Google X research lab, announced a research project to design nanoparticles that can catch diseases at an early stage.
(Image: © YouTube Screengrab/NewsyTech)

Google is developing nanoparticles that the company hopes will catch early signs of diseases such as cancer, but are there potential drawbacks to the technology?

The microscopic particles would be designed to bind to certain dangerous cells or molecules, such as cancer cells, or plaques in blood vessels that have the potential to cause heart attacks, according to BBC News. A person would swallow a pill containing the nanoparticles, and the tiny particles would travel through the body, looking for signs of disease.

Then, because the particles are magnetic, a person could wear a magnetic wristband that would attract the particles, and allow the device to interpret information from the particles, according to the Wall Street Journal. [10 Sci-Fi Predictions That Came True]

"Just by putting a magnet there [on the wrist], you can trap them, and you can ask them what they saw," Andrew Conrad, of the Google X research lab, said at a technology conference hosted by the WSJ. "Did you find cancer? Did you see something that looks like a fragile plaque for a heart attack? Did you see too much sodium?"

The hope is to catch signs of diseases before a person develop symptoms. "Every test you ever go to the doctor for will be done through this system,” Conrad told the Wall Street Journal.

The research is in the early stages, and it could be more than five years before it becomes a reality, the WSJ reported.

"It's an exciting concept, for sure," said Dr. Clay Marsh, chief innovation officer at The Ohio State University Wexner Medical Center, who is not involved with Google's project.

However, nanoparticles have held promise for years, but there are challenges that come with these nanoparticle treatments, Marsh said.

One issue is safety — nanoparticles that monitor your health may need to stay in the body for a long time.

"Leaving something inside the body for your life, or for a long time, has potential complications," Marsh said. The nanoparticles might injure cells, or damage DNA, which could accelerate aging, Marsh said. Nanoparticles might also build up in the organs that clear unwanted substances from the body, such as the liver or spleen, he said.

For these reasons, it will be important to study the technology in animals for safety before trying it in people, Marsh said.

Another problem is that the new technology, like screening tests in general, may have the potential for false positives, which can lead people to undergo treatment when they are not sick, Marsh said.

In fact, people already have differences in their diet and blood chemistry that may make it harder to diagnose diseases in the way the nanoparticles will aim to do, he said.

In addition, the assumption that finding a disease early is always better is not necessarily true.

"Maybe we all have some cancer hidden away somewhere but it doesn't grow, so it doesn't cause a problem," Marsh said.

Once researchers identify the very early stages of disease, they have to do further studies to know whether treating it at that stage is beneficial, he said.

Dr. Jack Hoopes, a professor of medicine at the Geisel School of Medicine at Dartmouth College, said the concept of nanoparticles binding to specific cancer cells or proteins is feasible. "Many people are working on it, including us. This technology should be pursued," Hoopes told Live Science in an email.

But researchers still need to better understand aspects of the cancer biology, such as which proteins to look for with nanoparticles, what concentration of the proteins is necessary for detection and whether cancer cells are always present in the blood, Hoopes said.