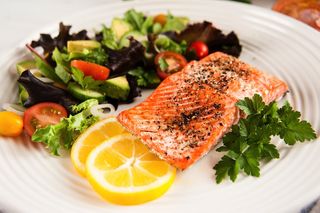 After a month of pumpkin pie, egg nog and sugar cookies, many people's top New Year's resolution is to eat healthier and lose weight. And an extreme form of the Paleo diet known as the Whole30 diet, which prohibits grains, sugar and legumes, may be an increasingly popular choice.

The Whole30 diet asks people to eliminate a host of staple foods for 30 days, after which people can then add certain items back into their diet thoughtfully. The creators of the diet, Dallas and Melissa Hartwig, claim it can improve immune function, mental clarity and even chronic health conditions such as diabetes or high cholesterol. Many people are drawn to the diet because they think it will lead to weight loss.

But experts don't agree on whether this new diet fad is healthy, and some say it is too extreme.

Because the Whole30 diet allows no grains or added sugars, most people who follow it will dramatically lower their junk-food intake, said Molly Kimball, a registered dietitian with the Ochsner Elmwood Fitness Center in New Orleans. [11 Foods That Can Make Us Gain Weight]

On the other hand, little research supports the restriction of foods such as legumes and yogurt, and if people aren't careful about the way they follow the Whole30 diet, they could end up with nutritional deficiencies, said Katherine Tallmadge, a Live Science contributor, registered dietitian and the author of "Diet Simple: 195 Mental Tricks, Substitutions, Habits & Inspirations" (Lifeline Press, 2011).

The main premise behind this modified Paleo diet is that humans may not have evolved to eat certain foods, such as added sugars, dairy, legumes and peanuts and grains, so these foods may cause health problems. Those who tout these diets say such foods commonly cause metabolic problems such as diabetes, immune system dysfunction such as chronic inflammation, hormonal imbalances, or unhealthy psychological attachments or cravings, said Hartwig, who is also author of "It Starts with Food," (Victory Belt Publishing, 2014).

"We're asking them to essentially do a scientific experiment of one: eliminate those foods; see how it impacts you individually," Hartwig told Live Science. "Then, you can make a deliberate, conscious decision about which foods are healthy. It's about how you arrive at your perfect diet."

No studies have looked at the health impacts of the Whole30 diet specifically. But some of the foods the diet recommends eliminating can cause problems for some people.

For instance, scientists generally agree that added sugars are a major culprit in obesity and heart disease. Many people are lactose intolerant, meaning they can't digest the sugar in dairy. At least 1 percent of Americans suffer from celiac disease, an autoimmune disorder that prevents them from eating gluten, which is found in many grains. And several studies, including one in published in November in the World Journal of Gastroenterology, have found that people with irritable bowel syndrome see their symptoms improve if they cut out certain types of carbohydrates commonly found in grains and many fruits and vegetables, called Fermentable, Oligo-, Di-, Mono-saccharides And Polyols (or FODMAPS).

But many nutritionists aren't sold. Most people don't have celiac disease or FODMAP intolerance, and eliminating so many foods from the diet could contribute to nutritional deficiencies, Tallmadge said.

In addition, new research, such as a 2013 study in the journal Nutrients, suggests that certain foods — such as legumes, beans and yogurt — are very important for the microbiome, the flora that line the intestinal track, Tallmadge said.

"When the microbiome is healthy, you're more likely to burn body fat," Tallmadge told Live Science. "This diet, which is heavy on meat, could actually damage the microbiome." [5 Ways Gut Bacteria Affects Your Health]

Although people will probably lose weight on the diet, that's likely because it's so restrictive that they will, by default, be eating fewer calories, Tallmadge noted. "Of course you're going to lose weight on a modified fast," she said.

Clearing out the junk

But others think the diet could be a good way to hit the reset button for people who normally eat an unhealthy, junk-food-laden American diet.

"If somebody can stick with this, it likely can help with the majority of the claims made about it," Kimball said.

Processed carbs and added sugars are a huge source of inflammation in the body, so any steps to eliminate those will probably improve people's health, she said.

"When we clear all that out of our diet, and put the emphasis on lean protein, vegetables, some fruits, healthy fats, nothing but good can come from it," Kimball told Live Science.

Some of the foods the diet shuns, such as kefir and yogurt, are nutritionally dense and likely not harmful for most people, she said. Still, doing the diet for 30 days isn't going to cause nutritional deficiencies. And because people who follow the Whole30 will probably replace a lot of junk food in their diet with fruits and veggies, they may actually be getting more nutrients, she added.

Editor's Note: This article was corrected to note that lactose is a sugar, not a protein.