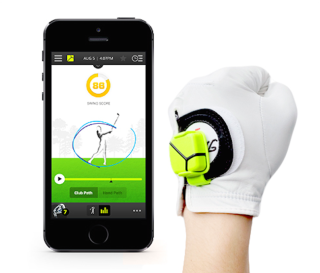 The Zepp Golf Swing Analyzer lets you track and compare your swing to that of the pros.
(Image: © Zepp)

The Zepp sensor is a small, wearable device that clips onto the top of your golf glove, and tracks all of the components of your swing — including club speed, swing plane, hip rotation, tempo and backswing position. The device is an option for any golfers who want a few pointers on improving their games, and it would be useful for avid golfers as well as those who only hit the green a few times a year. The sensor syncs with the free Zepp app, which lets you record both data and videos of as many swings as you'd like. Golfers can then compare the details of each swing, side by side.

The Zepp sensor is one of many new wearables designed to keep golfers at the top of their games. Other contenders include Game Golf, a digital tracking system that uses GPS data to track accuracy and swing performance over an entire course. While Zepp doesn't include GPS tracking, it does come with a lower price tag: Game Golf retails for just under $200, whereas Zepp goes for about $150.

Zepp's new sensor is a sequel to Golfsense, a much larger device that the company debuted in 2013. While neither of these devices has GPS capabilities (they seem to be designed with the driving range, not the golf course, in mind), one Zepp app feature does let you compare your swing to those of the pros. And the Zepp sensor can also be used with the company's apps for other sports, including tennis and baseball, making it an economical choice for those who dabble in more than one athletic pastime. [Best Fitness Trackers]

Though I'm not a golfer myself, my brother tees up every weekend, weather permitting. He graciously accompanied me to the driving range recently to see what Zepp could do for his game. Here's how it went:

When I opened the box containing the Zepp sensor, I was pleasantly surprised by how small this wearable is. This device is a 1.1-inch (28 millimeter) square that's just 0.4-inches (11 mm) thick, and it's hard to imagine the wearable getting in the way. The sensor comes with an equally diminutive mount that clips onto the back of your golf glove, right on top of where you Velcro the glove closed. The whole apparatus weighs less than half an ounce (11.6 grams).

Perhaps because the device is so small, it was a little tricky for my brother, Robby, to get the Zepp sensor mounted on his glove. He tried to clip the sensor on his own glove a few times but finally agreed to stand still while I clipped it on for him.

Once Zepp was in position, it remained firmly in place, and Robby said it was so light that he couldn't even tell it was there. To turn the sensor on, you press on one of the corners of the device for about four seconds, or until a few small LEDs embedded in the sensor light up. Since he's right-handed, Robby kept the power button positioned in the lower right corner of the mount (closest to his body), in order to be able to turn it on with his free hand. Lefties may want to keep the power button positioned in the lower left corner.

Despite being slightly awed by the sleek design of the Zepp sensor, I was a little disappointed that the box didn't contain of any kind of instruction pamphlet. To figure out how to use the device, I had to go online and find the support page. That turned out to be easy enough, but in my opinion, printed instructions are always a plus.

Before heading to the driving range, I downloaded the free Zepp app on my iPhone 6 and synced the Zepp sensor to my phone via Bluetooth, without encountering any problems. After we picked up a bucket of balls, Robby suited up with the sensor and I opened the app, which connected to the sensor right away. An icon appears at the top of the app to let you know that the sensor and the app are in sync.

Before you get started, the app will prompt you to adjust your grip. Using the arrows on the touch screen, you need to tell the app how you hold the club so it can more accurately track your swing. This is a nice feature, but as Robby pointed out, it's a little tough to hold a golf club and use an iPhone at the same time. So he firmed up his grip while I recorded this information on the phone. For the second time that day, we realized that using Zepp might be tricky if you don't bring someone along to help.

After syncing up, the app asks you to choose which club you'll be using, letting you choose from an extensive list.

Then came the fun part: Robby took his stance, and I stood a safe distance behind him and used the app's video-recording feature to film a few swings. Filming every swing isn't necessary since the Zepp sensor automatically records the data from a swing every time you hit a ball. But since there were two of us, we figured we might as well use the video component of the app.

What wasn't clear was how golfers might use the video feature when they're at the driving range alone. I suppose you could prop your phone or tablet up somewhere or set up a tripod, but that seems like a lot of work for a golf outing. The camera does have a timer that captures video in five-second increments. So if you do figure out how to record yourself, you can capture your swing without having to press record.

Data from each swing you take while wearing the Zepp is automatically uploaded to the device running the app. The app assigns each swing a score, so you can tell right away how each shot compares to those that came before it. After capturing a few swings on video, I handed my iPhone to my brother so he could see his stats after every swing.

But as Robby soon learned, seeing your stats and understanding your stats are two very different things.  Robby wasn't sure what to do with the data in front of him or how to improve from one swing to the next. It wasn't until we left the driving range that my brother really appreciated what Zepp could do.

Inside the app are video tutorials that explain each metric (club speed, club plane, hand plane, etc.), as well as how you can alter each one to improve your swing. Robby said he found the tutorial on club plane particularly useful and was able to learn how he might be able to improve that element of his swing.

Using the video recordings I took, Robby was able to see his swing for the first time ever, which was extremely useful, he said. It confirmed what he had long suspected, he said: His hip rotation needs a lot of work. Fortunately, there's a video tutorial for that, as well.

All in all, my brother seemed pleased with the data the app collected, even though it was a little overwhelming at first. He said he could see himself using the sensor again on the driving range and would feel more comfortable interacting with the app in real time now that he knows a bit more about the metrics that Zepp displays.

Golfers should keep in mind that Zepp's diminutive size means the device's batteries won't last for 18 holes. The battery run time is about 2.5 hours, which is probably plenty of juice if you're using Zepp on the driving range.

One of Zepp's most enjoyable features is the pro comparison, which lets you see how your swing measures up to those of professional golfers. Although we confirmed that Robby isn't the next Keegan Bradley, my brother did say the device could get him to improve his game enough to stir up some renewed competition among his golf buddies. If he wanted to, he could even share the swings he's most proud of via email and social media.

Because the device was easy to set up and use, it didn't make a casual outing to the driving range seem like a homework assignment, which was a big plus. However, some of the data that Zepp records is highly technical, and for a golfer in training, a bit more context would be helpful. I found myself regretting that we hadn't spent more time interacting with the app's "Training Center" feature before hitting the range.

The app has a convenient feature called Lab Reports that lets you see how you performed on any given day. Once you have a collection of these reports, you can track your progress over time. Tracking progress is also made easier with a feature called My Swing Goals, which provides several pre-established swing criteria based on skill level. For example, the ideal backswing position for an amateur golfer is preset to 270 degrees, so you can easily see how each of your swings compares to this number.

All in all, my brother and I agree that Zepp is a useful tool for anyone who wants to improve his or her swing without hiring a coach. The layout of the app makes it easy to track each swing, and the fact that you can also use this device to track your swing with a baseball bat or tennis racket makes Zepp even more useful for today's sports enthusiasts.

But you'll want to make sure you understand the metrics the sensor captures before you start using this wearable. Otherwise, you may end up with a lot of data that you don't understand. And if what you're really looking for is video footage of your swing, you might want to enlist the help of a friend (or sibling) when using the device.