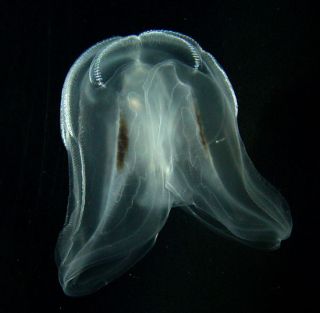 Earth's first animal was the ocean-drifting comb jelly, not the simple sponge, according to a new find that has shocked scientists who didn't imagine the earliest critter could be so complex. The mystery of the first animal denizen of the planet can only be inferred from fossils and by studying related animals today. To get to the bottom of that, scientists analyzed massive volumes of genetic data to define the earliest splits at the base of the animal tree of life. The tree of life is a hierarchy of evolutionary relationships among species that shows which groups split off on their own evolutionary path first. The new study surprisingly found that the comb jelly was the first animal to diverge from the base of the tree, not the less complex sponge, which had previously been given the honor. "This was a complete shocker," said study team member Casey Dunn of Brown University in Rhode Island. "So shocking that we initially thought something had gone very wrong." Dunn's team checked and re-checked their results and came up with the same result every time: the comb jelly came first. The results are detailed in the April 10 issue of the journal Nature, a journal that, like most respected journals, requires other scientists review a paper prior to publication. Unlike sponges, comb jellies have connective tissues and a nervous system, and so are more complex. Though squishy and tentacled, they are not, however, true jellyfish as they lack the classic bell-shaped body and characteristic stinging cells. The finding was unexpected because evolutionary biologists had thought that less complex animals split off and evolved separately first. Dunn says that two evolutionary scenarios can explain why the comb jellies would actually have been first among animals. The first is that the comb jelly evolved its complexity independent of other animals after branching off to forge its own path. The second is that the sponge evolved its simpler form from the more complex form. This second possibility underscores the fact that "evolution is not necessarily just a march towards increased complexity," Dunn said. Though scientists can say which animal branched off first, they can't date precisely when this early comb jelly diverged away. "Unfortunately, we don't have fossils of the oldest comb jelly," Dunn said. "Therefore, there is no way to date the earliest jelly and determine when it diverged." Though comb jellies are a common creature in the seas today, these modern specimens likely look very different from their early ancestors. Dunn and his team hope that their approach will fill other gaps in the tree of life, including where the branches of many of today's species belong. Other researchers involved in the study, funded by the National Science Foundation: Gonzalo Giribet of Harvard University, Mark Martindale of the University of Hawaii and Ward Wheeler of the American Museum of Natural History.