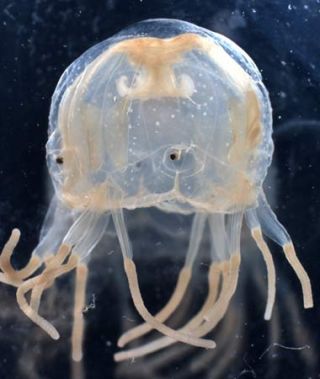 Tropical-dwelling box jellyfish have a cube-shaped body, and four different types of special-purpose eyes: The most primitive set detects only light levels, but another is more sophisticated and can detect the color and size of objects.
(Image: © Anders Garm)

A set of special eyes, similar to our own, keeps venomous box jellyfish from bumping into obstacles as they swim across the ocean floor, a new study finds.

Unlike normal jellyfish, which drift in the ocean current, box jellyfish are active swimmers that can rapidly make 180-degree turns and deftly dart between objects. Scientists suspect that box jellyfish are such agile because one set of their 24 eyes detects objects that get in their way.

The eyes of box jellyfish are located on cup-like structures that hang from their cube-shaped bodies.

Whereas we have one set of multi-purpose eyes that sense color, size, shape and light intensity, box jellyfish have four different types of special-purpose eyes. The most primitive set detects only light levels, but one set of eyes is more sophisticated and can detect the color and size of objects.

One of these eyes is located on the top of the cup-like structure, the other on the bottom, which provides the jellyfish with “an extreme fish-eye view, so it’s watching almost the entire underwater world,” said Garm, who will present his research at the Society of Experimental Biology’s annual meeting, in Scotland.

“They can’t respond to the see-through ones,” Garm said.

Because jellyfish belong to one of the first groups of animals to evolve eyes (the phylum Cnidaria), Garm said, understanding how their eyes operate will show scientists what eyes were like early in evolutionary time.