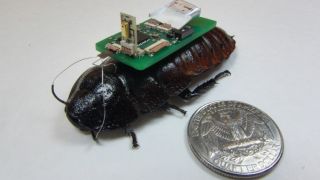 Researchers are testing "cyborg cockroaches" equipped with microphones to see if they could be used to hunt for disaster survivors.
(Image: © Eric Whitmire)

Remote-controlled cyborg cockroaches could one day be among the first responders at disaster scenes to help locate survivors.

A team of researchers at North Carolina State University has created a swarm of cyborg cockroaches, nicknamed "biobots," that are equipped with microphones to pick up sounds and trace them to their sources. The researchers hope the biobots could one day be used in disaster-relief situations to locate survivors.

Each cockroach has a tiny circuit board "backpack" attached to it that researchers can use to control the bug's movement. Some of the biobots have a single microphone that can capture sounds at a disaster scene and send them back to personnel. Others have a series of microphones that can pinpoint the source of a sound and then steer the bug toward it. [5 Crazy Technologies That Are Revolutionizing Biotech]

"The goal is to use the biobots with high-resolution microphones to differentiate between sounds that matter — like people calling for help — and sounds that don't matter — like a leaking pipe," Alder Bozkurt, a professor of electrical and computer engineering at North Carolina State University who worked on the project, said in a statement. "Once we've identified sounds that matter, we can use the biobots equipped with microphone arrays to zero in on where those sounds are coming from."

The researchers have already used the cockroach army to map disaster areas, but are now testing to see if the biobots could help find survivors.

Bozkurt and the team have also developed an invisible "fence" designed to keep the biobots within the boundaries of the disaster site. The fence is made of a series of sensors that redirect the cockroaches when they get too close. It also helps the biobots stick close together so they can maintain wireless communication with each other.

Early tests in the lab went well, the researchers said, but field testing is still needed to see how effective the bugs would be at a real disaster scene.

The idea of turning cockroaches into remote-controlled robots is not new. One company even sells DIY "RoboRoach" kits that enable people to create their own smartphone-controlled cockroaches. The assembler must first glue a backpack circuit board onto the roach's shell and then trim the roach's antennae and stick small electrodes in them that connect to the circuit.

But this kind of technology has stirred up an ethics debate. Allowing people, especially untrained individuals, to attach the backpacks and electrodes to the cockroaches has raised concerns about animal cruelty among some advocates and experts.

But when it comes to navigating disaster scenes, the cyborg roaches do have benefits.

"Insect biobots, with a natural ability to crawl through small spaces, offer unique advantages over traditional synthetic robots," the researchers wrote in a paper detailing the experiment.

The research was presented Nov. 5 at the IEEE Sensors conference in Valencia, Spain.