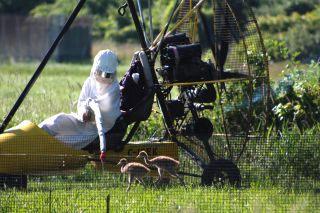 To prepare captive-born whooping crane chicks for life in the wild, humans have been teaching the birds how to eat and fly. But a new method of raising the endangered creatures would rely less on costume-clad caretakers and more on actual adult birds.
(Image: © USGS/photo by Paul K Cascio )

Whooping cranes have made an astonishing comeback in North America, thanks in part to some bizarre conservation methods. Over the past 13 years, dozens of cinnamon-brown chicks have been raised in captivity to be released into the wild, and they've learned their survival skills from biologists who dress up in vaguely birdlike costumes.

Strange as it sounds, this elaborate game of role-play has helped establish a new flock of whooping cranes that migrates each year from Wisconsin to Florida. But now, conservationists are faced with a conundrum: The birds raised by humans are turning out to be bad parents, and scientists don't know exactly where they're going wrong.

The people trying to save whooping cranes are now testing a new approach: They're matching some chicks with adult bird parents that can hopefully step in where humans are failing. [Quest for Survival: Photos of Incredible Animal Migrations]

In 1940, there were just 22 whooping cranes in the world. Today, there are about 550. The only natural migrating population that still exists is a flock that spends its summers in Canada and flies down to the Texas Gulf Coast for the winter. Nonmigratory flocks live in Florida and Louisiana. Some birds live their whole lives in captivity. And then, there's the Eastern Migratory Flock, which was artificially created as part of a whooping-crane reintroduction project starting in 2001.

Today, the flock has about 95 birds that spend their spring and summer in wetlands at Necedah National Wildlife Refuge and elsewhere in central Wisconsin. Sometime this month, or perhaps in early November, the flock will fly to the southeastern United States. The whooping cranes learned this migrating route from humans.

Eggs laid by captive whooping cranes in Maryland, Wisconsin and Alberta are incubated. When they hatch, the chicks are raised by humans cloaked in white costumes with a beaked puppet on their hands to teach the birds to eat and drink. [See Photos of the World's Cutest Baby Wild Animals]

"I don't know that they actually think of us as whooping cranes," said Glenn Olsen, a veterinarian at the U.S. Geological Survey's (USGS) Patuxent Wildlife Research Center in Maryland, who said he spends much of May through July in one of those costumes. The chicks are always in sight of actual adult whooping cranes. Biologists just don't want the birds to be handled by people in street clothes, Olsen told Live Science. If the cranes are to become truly wild, they can't get too cozy with humans, he said.

When the chicks are about 6 months old, they are released in Wisconsin. Then comes the most critical time in their life: their first migration. To learn the route, the birds follow an ultralight aircraft piloted by a costume-clad human all the way down to the Southeast. If the chicks don't experience that first migration, they won't ever learn to migrate.

"We have great success in doing this in that the birds survive," Olsen said. Captive-raised chicks that are released into the wild seem to thrive; they even pair off with mates and they breed.

"But they seem to be having trouble nesting and raising chicks, and we don't know how much of the component of raising chicks is innate or learned," Olsen said.

That's a big problem, because for whooping cranes to become totally self-sustaining in the wild, they'll need to raise wild-born chicks themselves. Olsen and other biologists think the birds' strange upbringing might have something to do with their tendency to abandon their eggs.

"Costume-rearing is really a very odd way to raise a crane," said John French, the leader of the USGS whooping-crane project at Patuxent. "Basically, you've got crane handlers running around in these long, white robes — it's like they're wearing a burka or something."

French, Olsen and their colleagues are trying out a new method called "parent-rearing," which relies on captive whooping crane parents — not costumed human handlers — to care for, exercise and feed the chicks after they hatch.

At the end of September, four parent-reared chicks were released at Necedah, along with seven costumed-reared chicks that are intended to join the Eastern Migratory Flock.

These young birds were put in predator-resistant pens at Necedah near other free-ranging whooping cranes, including pairs of adults without chicks of their own. These whooping-crane couples tend to "adopt" other chicks, and when it comes time to migrate, the adults will lead the fledglings southward. Last year, two parent-reared birds successfully migrated, Olsen said.

Most likely, the chicks raised by adoptive parents will pair up with birds raised by humans. It's hoped that the adopted chicks will be able to pass along good parenting habits.

The scientists will have to wait a few years before they know whether they've been successful, as whooping cranes don't typically start nesting until they're about 3 years old.