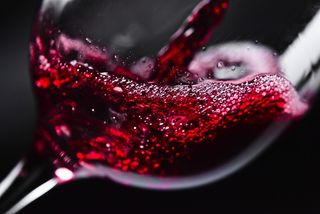 There are bacteria in wine that may be beneficial for people's health, new research finds.

In the study, researchers in Spain isolated 11 strains of bacteria from wine, including strains of Lactobacillus, which are also found in yogurt, as well as Oenococcus and Pediococcus bacteria, which are associated with the wine-making process.

"Up to now, many studies have reported that the best [foods] to deliver probiotics are dairy fermented products, so that the probiotic properties of wine-related [Lactobacillus] were hardly studied," said study author Dolores González de Llano of Universidad Autónoma de Madrid in Spain.

But "nowadays, there is a need for novel and nondairy probiotics, from the increasing number of lactose-intolerance cases occurring in the world population, coupled with the unfavorable effect of cholesterol contained in fermented dairy products," González de Llano told Live Science. [Don't Be Fooled: 5 Probiotics Myths]

Probiotics are live organisms that can bring health benefits when consumed in the right amounts, González de Llano said. Consuming probiotics may be beneficial primarily for maintaining a healthy community of gut bacteria and bowel function, she said, adding that probiotics have also been reported to possibly have anti-cancer and cholesterol-lowering properties.

In the study, the researchers examined the ability of the bacteria they isolated from wine to survive in conditions similar to those found in the human gastrointestinal system. Bacteria in any food product must to be able to survive in the hostile environment of the gastrointestinal tract in order to have an impact on human health.

The researchers looked to see whether the bacteria in wine could survive when exposed to simulated gastric juice, bile and lysozyme, an enzyme that is highly concentrated in human saliva that can damage bacterial cell walls.

They found that the bacteria could survive in such conditions, and their survival was comparable to or even better than the survival of several strains of bacteria known to be beneficial to human health.

The investigators also looked at how well the bacteria in wine might stick to the walls of the human intestine by growing human intestine cells in a lab dish. They found the bacteria did stick, and therefore, the bacteria "may provide beneficial effects, such as the exclusion of pathogens," or harmful bacteria, from the intestine, they wrote in the study.

In particular, one strain of bacteria found in wine, called P. pentosaceus CIAL-86, had an "excellent" ability to stick to the intestinal wall and "good" activity against E. coli, the researchers said.

The probiotic properties of the lactic-acid bacteria isolated from wine are similar to those of probiotics that come from foods like dairy products such as fermented milk or yogurt and dry sausages, and foods of plant origin such as sauerkraut and olives, fruits, cereals, meat or fish, she said.

The new findings do not mean, however, that drinking a couple glasses of wine a day will provide the same health benefits as eating a food like yogurt, she said.

Even though the moderate consumption of wine, which she defined as two glasses per day, may confer certain health benefits, wine does not currently provide a sufficient amount of probiotics to be beneficial, because many of the bacteria are eliminated during a process called sulfating, which stabilizes wine, she said. (Sulfating is the process of adding sulfites, which are preservatives commonly used in winemaking.)

However, probiotics "could be isolated from wine in order to be commercialized as probiotics, or added to functional foods," she said.

The study will be published in the December issue of the journal Food Microbiology.