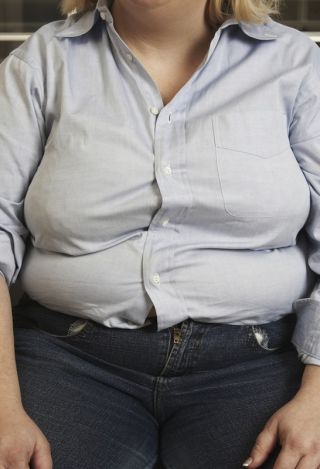 Well aware of the stigma that obese equals sloppy, overweight people reminded of stereotypes tend to value dressing nicely to make a first impression over other tactics, according to an April 2013 study in the journal Psychological Science.
(Image: © bikeriderlondon, Shutterstock)

Freelance writer Marlene Cimons is a former Washington reporter for the Los Angeles Times who specializes in science and medicine. She writes regularly for the National Science Foundation, Climate Nexus, Microbe Magazine, and the Washington Post health section, from which this article is adapted. Cimons contributed this article to LiveScience's Expert Voices: Op-Ed & Insights.

In 2008, Rob Knight fell ill while vacationing in Peru. Camping along the Inca Trail, he found himself with the usual traveler's symptoms, scrambling for the latrine in the middle of the night. He took antibiotics for five days and got better but then relapsed. A second five-day course of the drugs finally knocked out the infection.

After he returned home, Knight resumed his normal diet and exercise activities, and suddenly began dropping pounds that he had been trying to shed for years. He is convinced the antibiotics changed the composition of the microbes in his gut in a way that finally caused him to lose weight — at least 70 pounds.

"Exercise and diet, which had not worked before, began to work," says Knight, a professor of chemistry and biochemistry at the University of Colorado at Boulder who studies the microorganisms that live in our bodies, known as the human microbiome. "I think that reconfiguring my gut microbial community made it possible."

His experience underscores a growing body of evidence suggesting that naturally occurring bacteria and other microbes in the body, and possibly even viruses, can influence weight in ways that scientists are only just beginning to understand. Numerous studies are underway looking at the role of intestinal organisms in obesity, with a focus on how they extract energy from food and how this affects weight gain or loss.

Ultimately, scientists say, insights gained from the research could identify people predisposed to obesity and possibly help clinicians create targeted weight-loss treatments for them. The specific composition of microbes in the intestines also might help predict the best candidates for weight-loss surgery, which doesn't work for everyone.

"Taken together, we might at some point be able to effect weight loss in humans by affecting the microbiome," Knight says.

Obesity in the United States has risen dramatically during the past 20 years. More than a third of American adults and about 17 percent of children and adolescents — triple the rate of a generation ago — are obese, according to the U.S. Centers for Disease Control and Prevention. The U.S. surgeon general estimates that as many as 300,000 Americans' deaths every year may be linked to obesity.

Despite the popularity of fad diets, most experts believe there is no quick fix to losing weight. They view regulation of body weight as a complicated process that is likely to involve diet and exercise, genetics, and probably, various gastrointestinal microbes.

Studies in mice have shown that intestinal microbes may contribute to weight gain. A novel experiment published this fall, for example, took gut bacteria from human twins — in which one was lean and the other obese — and transferred them into lean mice. The animals with bacteria from fat twins grew fat; those that received bacteria from lean twins stayed lean.

Researchers suspect that bacteria may behave similarly among humans, since microbes help to extract calories from food and store that potential energy in fat tissue.

Researchers speculate that people are more likely to gain weight when gut bacteria are more efficient at breaking down food, enabling the body to absorb more calories. They theorize that less-efficient bacteria allow food to pass more quickly through the intestines.

"If you want to stay lean, you'll want bacteria that are not very efficient," says Claire Fraser, a professor of medicine and microbiology and immunology at the University of Maryland School of Medicine. "If we each eat a bowl of cereal and your bacteria are better than mine at breaking it down, you'll get 95 calories, while I'll only get 70, and the rest will pass through. You're the one who's going to gain weight."

The food one eats contributes to the composition of the bacterial communities in the gut. For example, Fraser says, "high-fat, low-fiber diets have been associated with different bacteria in the gut than low-fat, high-fiber diets," which may play a role in who develops obesity. "It may be a vicious cycle but one we can interrupt by altering our dietary habits."

Recent studies by Stanley Hazen of the Cleveland Clinic, for example, have found that gastrointestinal bacteria "burp" out a chemical called TMAO (for trimethylamine N-oxide) after people consume red meat or eggs. TMAO increases the risk of heart attack and stroke, which may help explain why eating those foods increases the danger of heart disease more than following a vegan or vegetarian diet.

In another study, Fraser, Knight and colleagues studied members of the Old Order Amish in Lancaster, Pa., to see what their gut microbes might reveal about obesity in that community. The Amish were ideal study subjects, being a genetically homogenous society with a shared lifestyle, including a diet that features "lots of meat, potatoes and gravy, very high fat and high carbohydrate," Fraser says.

The researchers analyzed data from 310 people and identified 26 species of gut bacteria that were found at different concentrations in obese individuals who had — or didn't have — metabolic syndrome. Metabolic syndrome is a cluster of conditions that includes hypertension, high blood-sugar levels, abnormal cholesterol, excess body fat around the waist and elevated serum markers associated with inflammation. The syndrome has been found to increase the risk of heart disease, stroke and diabetes.

One of the hallmarks of metabolic syndrome is chronic low-grade inflammation in the body, and "some of the bacterial species that were found at greatly reduced levels in subjects with the metabolic syndrome have been shown to have anti-inflammatory properties," Fraser says.

Knight points out, however, that the difference in microbial communities might be the result of inflammation rather than the cause of it, a question additional studies will need to examine.

Scientists also are trying to understand the influence of gut microbes in the outcome of weight-loss surgery, with the goal of identifying the best candidates for the procedure. In 2010, about 150,000 individuals underwent weight-loss surgery in the United States, according to the American Society for Metabolic and Bariatric Surgery.

Bruce Rittmann, director of the Swette Center for Environmental Biotechnology in the Biodesign Institute at Arizona State University, was part of a group of researchers who specifically looked at microbes in gastric bypass surgery patients for a 2009 study.

He and team leader Rosa Krajmalnik-Brown, associate professor in the Swette Center, analyzed stool samples from nine people in three groups: three individuals of normal weight, three who were morbidly obese and three who had undergone gastric bypass.

"The results were very striking," Rittmann says. "Even though we didn't have a large number of subjects, the groups were completely different from each other."

The composition of microbes in the three gastric bypass patients differed substantially and in potentially important ways from obese and normal-weight individuals, suggesting that the extreme anatomical changes resulting from the surgery apparently had profound effects on the microorganisms living in the intestine.

There were two types of organisms specific to the obese group. The microbial populations extracted from obese individuals were high in hydrogen-producing bacteria, known as Prevotellaceae, and hydrogen-consuming methanogens, which are not bacteria, but another single-cell organism, Archaea.

The results suggest a cooperative co-existence in obese individuals between hydrogen producers and hydrogen consumers, a mutually reinforcing relationship known as syntrophy that contributes to obesity.

The researchers theorize that the methanogens, by removing hydrogen, speed up the breakdown of food, boosting the production of fatty acids and leading to the formation of fat, which over time, results in obesity.

Rittmann and his colleagues have another study underway, this time examining people before and after weight-loss surgery and comparing the types of weight-loss procedures, trying to determine which microbic changes occur and what they might mean.

"Managing the microbial community in our intestines is one of the tools of helping us manage obesity and other diseases," he says. "It's conceivable that someday we could get rid of the wrong microorganisms and put the right ones in. That is, ultimately, what we would like to do."

Knight, however, warns that people should not assume that a course of antibiotics might make them thin, as he believes it did in his case. In fact, he says, it's just possible that the opposite could occur.

"It's difficult to generalize one person's experience to the general population, especially because different people vary so much in their response to drugs, diet and exercise," he says. "We are a long way from turning that into a large-scale study. All we have at the moment is an intriguing anecdote, based on a sample size of one."

Want to know which microbes live inside your gut? Researchers at the University of Colorado at Boulder, in collaboration with the Human Food Project, have created an open-access, crowd-funded project, "American Gut," where you can find out. They will tell you not only which microbes are in there but also what they are doing. Anyone can participate, although there is a fee to do so. Information is at www.humanfoodproject.com/americangut.

The author's most recent Op-Ed was "Frailty Is a Medical Condition, Not an Inevitable Result of Aging." This article is adapted from "The Microbes in Your Gut May be Making You Fat or Keeping You Thin," which appeared in the Washington Post.The views expressed are those of the author and do not necessarily reflect the views of the publisher. This version of the article was originally published on LiveScience.