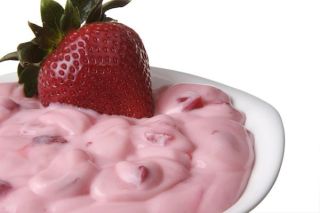 Eating yogurt four or five times a week may lower the risk for developing Type 2 diabetes, a new study has found.

Researchers in the United Kingdom looked at the diets of 4,000 people and followed them for 11 years. They found that people with the highest yogurt consumption had a 24 percent lower risk of developing diabetes, compared with people who didn't eat yogurt.

This risk reduction was seen in study participants who consumed an average of four and a half 4-ounce servings of low-fat yogurt per week, according to the study published today (Feb. 5) in the journal Diabetologia.

The study found an association, not a cause-and-effect relationship between eating yogurt and lowered risk of diabetes.

And at least part of the positive effect of eating yogurt seems to stem from the fact that people who eat yogurt also eat fewer unhealthy desserts and snacks, the researchers said. They found that replacing a serving of chips with a serving of yogurt reduced the risk of diabetes by 47 percent. [9 Snack Foods: Healthy or Not?]

The researchers didn't find a link between total dairy consumption and the risk for diabetes, suggesting that only some dairy products may be beneficial in reducing the risk for this condition.

Diabetes is a disease in which blood glucose levels are above normal, because the body cannot get the glucose into the cells to be used for energy. Risk factors for developing diabetes include obesity and physical inactivity.

About 26 million people in the United States (8.3 percent of the population) have diabetes. If current trends continue, one out of three U.S. adults will have diabetes by 2050, according to the Centers for Disease Control and Prevention.