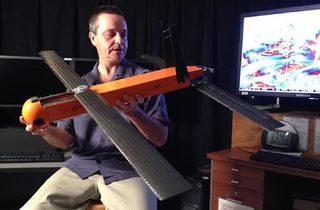 One U.S. government agency is taking the drone craze to new extremes: Researchers with the National Oceanic and Atmospheric Administration (NOAA) recently flew a drone directly into a hurricane.

By launching the drone right into the eye of the storm, the scientists hope to collect data — including temperature, pressure and wind speed — that normally would be impossible to gather in a manned aircraft.

The so-called Coyote drone measures 3 feet (1 meter) long and is electrically powered. The researchers flew the Coyote drone Monday (Sept. 15) into Hurricane Edouard, which has since weakened from a Category 3 to a Category 1 storm, but is maintaining its strength over the North Atlantic Ocean, according to the National Hurricane Center. [Hurricanes from Above: See Nature's Biggest Storms]

Although Edouard is not expected to be a major threat to the U.S., it was the Atlantic Ocean's first major hurricane of the year, and the first to reach Category 3 status since Hurricane Sandy ravaged the U.S. East Coast in 2012.

The Coyote drone can fly below 3,000 feet (914 meters), which is much lower than the altitude at which piloted aircraft can safely fly, NOAA officials said in a statement. This means the drone can gather information close to the surface of the ocean, including water-temperature data that may help NOAA scientists predict how intense a hurricane is likely to get.

Traditionally, NOAA has used weather instruments known as dropsondes to collect data this close to the ocean's surface. A dropsonde is a device that is dropped from an aircraft and falls through a storm to measure winds, temperatures and humidity. But these instruments are fairly flimsy and don't power themselves — they simply float around with a parachute — according to NASA.

The Coyote drone can fly for up to 2 hours, and NOAA thinks these longer flights will allow for more complete data collection than what's currently possible with dropsondes.

NOAA's first test flight of the drone, conducted earlier this month, was a success. The flight tested the drone's ability to launch from the agency's P-3 aircraft, which involves dropping the drone from a free-fall chute in the belly of the plane. Once deployed, the droneis designed to open its wings (which stretch 6 feet, or 1.8 m, across) and respond to flight commands from a pilot aboard the P-3. The drone can also be controlled from several miles away, according to NOAA.

At 7 lbs. (3.2 kilograms), the drone naturally flies with the wind current, but it can be directed up, down and sideways in order to measure different areas of a storm, including the inner core of a hurricane.

Originally developed for use by the U.S. Navy, the Coyote drone was made available to NOAA through the Disaster Relief Appropriations Act of 2013, which went into effect after Hurricane Sandy. NOAA says the drone is just one of several technologies and research projects funded through the act that could help improve weather forecasting, especially for large storms.